Christian McCaffrey is currently in a relationship. He is dating Olivia Culpo. She is an American model and actress who won both Miss USA 2012 and Miss Universe 2012 titles.

The couple started dating in 2020. They met through some mutual friends.

Previously, he dated Brooke Pettet, a student of journalism. He has also been in a relationship with Marybeth Sant. 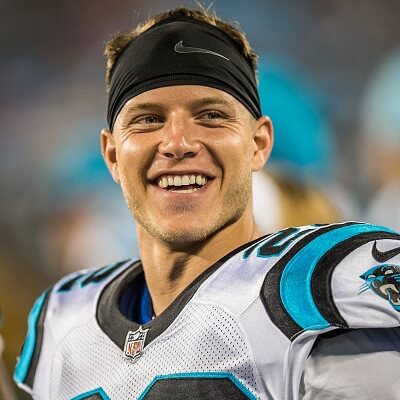 The goal every offseason is just to get as fast as you can, stay healthy

People do the eye test and underestimate me, so I do play with a chip on my shoulder

Every great team has multiple backs. Very few times do you have just one back.

Who is Christian McCaffrey?

Christian McCaffrey is an American professional football player. He plays like a football running back for the Carolina Panthers of the NFL. He played college football at Stanford Cardinal.

Christian McCaffrey was born as Christian Jackson McCaffrey in Castle Rock, Colorado, on June 7, 1996. As of 2021, his age is 25. Sports are in his genes as both of his parents were sports stars.

McCaffrey spent his childhood days in Castle Rock and his ethnicity is Caucasian.

Regarding his educational background, he went to Valor Christian High School in Highlands Ranch, Colorado where he played football, basketball, and track. Following that, he joined Stanford University to play football.

After finishing his career at Stanford where he made numerous records and finished as one of the college’s best-ever players, he received an invitation to the NFL Combine.

The Carolina Panthers selected him in the 1st round with the eighth overall pick in the 2017 NFL Draft.

Christian made his NFL debut in the Panthers’ season-opener against the 49ers recording 47 rushing yards and 38 receiving yards in a 23–3 victory.

In Week 5 against the Lions, he scored his first career touchdown on a 6-yard shovel pass.

In his debut season, The Panthers made the playoffs as the #5-seed. Against the New Orleans Saints, in the Wild Card Round, he had 16 rushing yards, 6 receptions, 101 receiving yards, and a receiving touchdown.

More success followed in the 2018 season. In Week 2, against the Falcons, he recorded a career-high 14 receptions for 102 receiving yards with 37 rushing yards.

On November 25, 2018, he became the first Panther player to have over 100 yards rushing and receiving in the same game, a feat which he achieved in a loss to the Seattle Seahawks.

2019 proved to be a huge season for him as he established himself as one of the best in the league. In Week 1 in a loss against the Rams, he rushed 19 times for 128 yards and 2 touchdowns and caught 10 passes for 81 yards.

During Week 5 against the Jaguars, he set a personal best of long rushing touchdown with an 84-yard touchdown run. In Week 11 against the Atlanta Falcons, he finished with 121 receiving yards and 70 rushing yards.

McCaffrey stands at a height of 5 feet 11 inches and weighs around 92 kg.

His listed arm length and hand sizes are 0.77m and 0.23m respectively. He has brown hair and green eyes.

Christian McCaffrey has an estimated net worth of around $10 million as of 2021. However, it is expected to grow in the coming years as he is already the highest-paid running back in NFL history.

McCaffrey signed a $64-million deal with an average salary of $16 million per year making him the highest-paid running back in NFL history.

As of 2020, Christian has not been involved in controversies. He has stayed away from any controversial subject matters and has kept his profile clean. Similarly, there are no rumors about him.

You may also like to read the Bio, Career, Net Worth, Relationships, and more about Reagan Agee, Troy Polamalu, Carrie Yocom, and more.