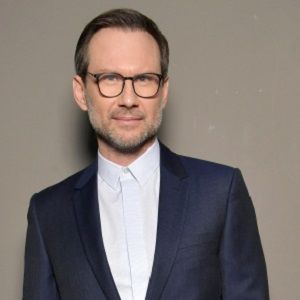 Drama can be an addiction. It's so, so sneaky. Jealousy - all of those things can really send you in a lot of different crazy directions.: When you sign onto something, you want the character to be redeemable and likable, hopefully, and understandable.

Christian Slater was first romantically involved with fellow actress Winona Ryder and Samantha Mathis. After that, he was linked with model Christy Turlington. Finally, he was married to producer Ryan Haddon in February 2000. The couple was blessed with two children Jaden and Eliana before splitting in 2005 which was finalized the following year.

Following that divorce, he found new love in the name of Brittany Lopez whom he dated for three after getting married on 2nd December 2013. As for now, he is having good times with her wife and living happily with her.

Who is Christian Slater?

Christian Slater is an American actor best known for his roles in films like Heathers, True Romance, and Robin Hood: Prince of Thieves. He is also known for his titular character in TV series called Mr.Robot. Furthermore, he is also a voice actor and producer.

Christian Slater was born to Michael Hawkins (né Thomas Knight Slater) and Mary Jo Slater (née Lawton)  on August 18, 1969, in New York City, USA. He is of an American nationality and has mixed ethnicity of German, Irish, English, and Welsh.

Moving towards his education, he was educated from Dalton School and Professional Children’s School. Later, he was enrolled at the Fiorello H. LaGuardia High School of Music & Art and Performing Arts.

As Slater came from filmy background family he quickly adapted to the scenario. His acting debut came through ABC soap opera  ‘One Life to Live’ which was followed by a couple of films in the 1980s. It was the 1989’s cult classic “Heathers’,  which gained him attention as an actor. Later, he was signed in many big projects of the 1990s including ‘Robin Hood: Prince of Thieves’, ‘Interview with the Vampire’, ‘FernGully: The Last Rainforest’, ‘Broken Arrow’, and ‘Hard Rain’

In the 2000s he has come up with many hits films like The River Murders (2011), Soldiers of Fortune (2012), Bullet to the Head (2013). In the year 2015, he was widely known for his titular character in the cyber-thriller ‘Mr. Robot’. For the same thriller, he has bagged his first Golden Globe Award.

Of all his success in film and TV industries for the last three decade, he has saved and earned a decent amount of money. He has an estimated net worth of $30 million.

Slater was arrested for many cases including drunk driving in 1989 and caught trying to board a commercial plane with a gun in his luggage in 1994. Furthermore, he was convicted of assaulting a police officer and his then-girlfriend, Michelle Jonas in 1997. After, that he was accused of sexually harassing women on the street in 2005.

Slater weighs around 75 kg and stands 5 feet and 8 inches tall. His eyes are green and have black hair. Furthermore, he has 41 inches chest, 33 inches waist, and 15 inches biceps.