Christian Vazquez is a Puerto Rican professional baseball player. He plays as a catcher in the MLB for the Boston Red Sox. He is married to Gabriela Otero Vazquez.

Chrstian Vazquez is a married man. He is married to Gabriela Otero Vazquez. She is Puerto Rican like Christian. According to her Instagram bio, she has a degree in political science.

The couple exchanged wedding vows in November 2018 in Puerto Rico. After a year of getting married, Gabriela gave birth to their first child, a boy named Diego on November 2, 2019. 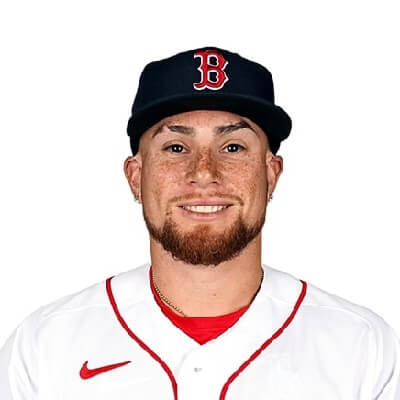 Who is Christian Vazquez?

Christian Vazquez is a Puerto Rican professional baseball player. He plays as a catcher in the MLB for the Boston Red Sox.

Christian Vazquez was born as Christian Rafael Vázquez in Bayamon, Puerto Rico, on August 21, 1990. As of 2020, his age is 29. He was born to parents Rafael Vazquez (father) and Eileen Berríos (mother). He is his parents’ only child and does not have any siblings.

Vazquez spent his childhood days in Puerto Rico and loved playing baseball from a young age. His ethnicity is Puerto Rican.

Talking about his educational background, he attended the Puerto Rico Baseball Academy and High School.

On July 9, 2014, he made his MLB debut starting as a catcher against the Chicago White Sox. On July 11, Vázquez recorded his first career hit off of the Houston Astros’ Scott Feldman. Against Jeremy Hellickson of the Tampa Bay Rays, he hit his first home run. In his debut season, he played 55 games batting .240 with one home run and 20 RBIs.

His 2015 season was plagued with injuries as he had to undergo a Tommy John surgery and missed the entire season.

In 2017, Christian batted .290 with five home runs and 32 RBIs playing 99 games. The highlight of his year was the game at Fenway Park, in which he belted a ninth-inning three-run walk-off home run to beat the Indians, 12–10. The incredible comeback is considered by many to have been the best game of the season.

In 2018, Vázquez was batting .213 for the season, with three home runs and 14 RBIs before getting injured. He missed six to eight weeks due to surgery. He ended the season with 80 games in which he batted .207 with 3 home runs and 16 RBIs. Vázquez appeared in 12 postseason games as the Boston Red Sox won the World Series against the Los Angeles Dodgers.

Vazquez stands at a height of 5 feet 9 inches and weighs around 88 kg. He has dark brown hair and brown eyes.

Christian has not been involved in any controversies. He has been able to keep himself away from any type of controversy and scandal. So far, he has not done anything controversial in his career. Similarly, there are no rumors about him of any kind. He has kept his profile clean and has simply focused on her career and personal life.

You may also like to read the Bio, Career, Body Measurements, Net Worth, Social Media, Relationships, and more about Albert Pujols, Eric Hosmer, Troy Tulowitzki, and more.