Christian Yelich is an American professional baseball outfielder. Christian is in a relationship with Emily Balkind. 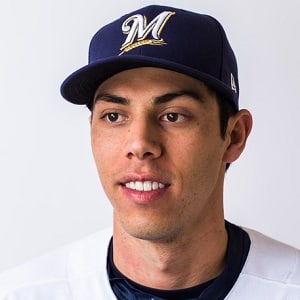 I'm really thankful for the opportunity the Marlins gave me. They drafted me in 2010 and gave me a chance to play in the big leagues. I made lifelong friends there, and I've got a lot of great memories

If you want something, you've got to take it

It happens throughout the year where your swing feels better, or it feels worse

you feel good, you feel bad.

What is the relationship of Christian Yelich?

Christian Yelich is in a relationship with Emily Balkind. His girlfriend Emily is a social media influencer.

Furthermore, there is no information about their dating details. Christian has kept his romantic life lowkey.

Who is Christian Yelich?

Christian Yelich is an American professional baseball outfielder. Currently, he plays for the Milwaukee Brewers of Major League Baseball (MLB).

Additionally, he previously played for the Miami Marlins.  He was drafted in the first round of the 2010 Major League Baseball Draft.

Yelich was born in Thousand Oaks, California on December 5, 1991, as Christian Stephen Yelich. His mother is Alecia Yelich. Additionally, he has two brothers, Collin and Cameron.

Yelich’s uncle Chris Yelich, played football for the UCLA Bruins. He developed an interest in the world of baseball in his childhood years.

He is of American nationality. Furthermore, he belongs to a mixed ethnic background of Serbian, Japanese, Croatian, Bulgarian, German, English, Danish, Scottish, and Dutch.

He was awarded Second Team All-American and was 34 among the top 100 players in high school.

Eventually, Christian was drafted by the Marlins 23rd overall in the 2010 Major League Baseball draft.

Coming to his international career, in the 2017 World Baseball Classic, Christian played for the United States national baseball team. Additionally, he also got selected MLB All-Stars at the 2018 MLB Japan All-Star Series on September 10, 2018.

Yelich won the Gold Glove Award in left field in the 2014 season. In addition, he is also a recipient of the annual Hank Aaron Award.

Yelich has received a salary of 7 million USD in 2018 instead of $1 million.

Additionally, he has an estimated net worth of around $13 million at present.

There is a rumor which suggests that Yelich might be dating Danielle Gersh who is a TV news anchor. However, this still remains a rumor as neither of them has spoken about this rumor.

Additionally, Christian became part of a controversy after a video surfaced of a man who appeared to be engaging in oral sexual activity.

People claimed that the man in the video was Yelich. Yelich later released a statement and said that the video was defamatory. At present, there are no rumors concerning his life and career.

Talking about his body measurement, Christian Yelich has a height of 1.9 m. Additionally, he weighs around 88 kg.