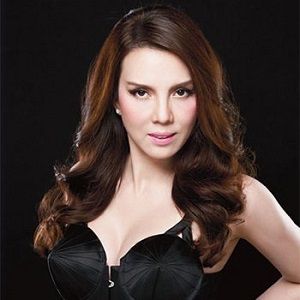 What is the relationship of Christina Aguilar?

Talking about her relationship, she is living a single life so happy as she is focusing on her career. Also, even if she is dating someone, she has not revealed anything about it.

She doesn’t share her personal life in public. Moreover, she has not yet been spotted with anyone in public places. There is no information regarding her relationship.

Who is Christina Aguilar?

Christina Aguilar is a melodious Thai singer. She is one of Thailand’s well-known voices in the music industry.

She has a title of being the first female music artist from the nation of Thailand who sold over 1 million copies of her record.

Christina Aguilar was born in Bangkok, Thailand on October 31, 1966, at the age (of 55). She is the daughter of Tony Aguilar (father) and Margaret (mother), her father is a Filipino musician and her mother is Franco-Vietnamese.

Additionally, she often sang with her family and was into music right from her childhood days.

Whereas, she was a student of the French Institute before she took to fame as a pop star. Besides that, she has studied in France and completed her degree in business management.

Similarly, she speaks Thai fluently and has also mastered English, French, and Spanish.S he has two siblings namely, Anthony and Theresa. She belongs to Thai nationality and mixed (Filipino- French). Her birth sign is Scorpio.

Likewise, she studied at the French Institute, pursuing a bachelor in business management studies in France.

On talking about her profession, she has been active in this field from 1990 when she was 24 years of age. Her genres while singing are pop and dance.

Her song beats are fabulous and the listeners enjoy it. She also started showcasing her singing abilities right from her college days when during an annual party she sang Sweet Memory.

Additionally, people often call her Thai’s Queen of Dance. Her first album was called Ninja and it sold more than a million copies, which was a feat the first of its kind for a Thai female singer.

Christina’s next three studio albums also sold over 1 million copies and she is the first Thai artist to have the record of selling more than a million of her first 4 albums.

Her third album was called Red Beat and it sold the highest number of copies. The figure was pegged at 3 million. This record is the best amongst the female artists of Thailand and no artist has yet broken it.

Moreover, she has also eight solo albums and together they have sold over 10.5 million copies to date. Christina e also began doing live concerts and tours and her popularity soared. She has an impressive discography.

She won MTV Video Music Award for Video of the Year for Lady Marmalade. Likewise, she won Grammy Award for Best New Artist for Ain’t No Other Man, Beautiful, Say Something.

Similarly, she won Billboard Music Award for Top Female Artist. Then, she won the Glamour Award for Woman of the Year.

There is no information regarding her income, salary. Whereas, her net worth is around $160 million.

She has not been involved in any rumors and controversies in her professional career.

Also, read the affair, salary, the net worth, controversy, and the bio of Drake, Kirstin Maldonado, Jonathan Groff