Christina Aguilera dated Enrique Iglesias in September 1998. Their relationship grew when they did a stage performance together in New York City.

They were seen lip-locking after that and also during many instances. But, their bonding didn’t progress. She dated Jorge Santos for around 2 years until September 2002. She called him her “first love” in 2002.

Christina had a short-lived affair with TV host and radio personality, Carson Daly, in 2002. Then, she dated musician Dave Grohl, of the Foo Fighters fame, in March 2002.

She dated music marketing executive, Jordan Bratman in 2002 after meeting her at a recording studio. They engaged in February 2005 and their marriage took place on November 19, 2005, in a Napa Valley estate.

Moreover, she dated Matthew Rutler in November 2010. In February 2014, Matthew proposed to Christina and she accepted the proposal and they engaged on Valentine’s day 2014.

This couple is blessed with a daughter named Summer Rain in the year 2014. 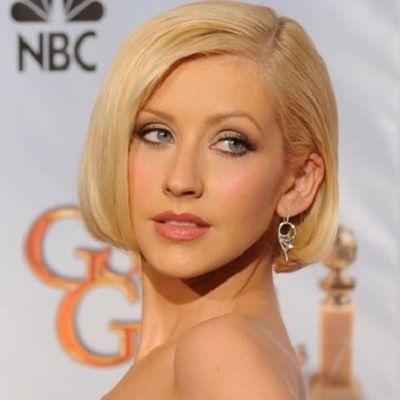 It's funny how society places such strict standards upon young blonde females. We're supposed to play the clean-cut view the public wants of us. But I am not your little cookie-cutter virgin.

I think that whatever size or shape body you have, it's important to embrace it and get down! The female body is something that's so beautiful. I wish women would be proud of their bodies and not dis other women for being proud of theirs!

It's been quite a roller-coaster ride, But I think I've grown and learned a lot about myself. In this business, it's often all about hype, record sales, and a crazy schedule of traveling, performances, and it can be easy to get lost in all that. But for me, the greatest thing is being able to interact with fans and touch peoples' lives. I know that's a greater accomplishment than selling records. For that I give thanks. I simply love the job I'm doing.

My parent's divorce and hard times at school, all those things combined to mold me, to make me grow up quicker. And it gave me the drive to pursue my dreams that I wouldn't necessarily have had otherwise.

Who is Christina Aguilera?

Christina Aguilera is a famous American singer, songwriter, actress, and television personality. Likely, her accolades include five Grammy Awards, one Latin Grammy Award, and a star on the Hollywood Walk of Fame.

Similarly, Aguilera ranked at number 58 on Rolling Stone’s list of 100 Greatest Singers of All Time in 2008 and was included on Time’s annual list of the 100 most influential people in the world in 2013.

Christina Aguilera was born in New York City, the United States on  December 18, 1980. Her birth name is Christina María Aguilera.

Her father’s name is Fausto Xavier Aguilera who was in the US army which meant that they had to move from place to place and her mother’s name is Shelly Loraine who was a violinist and a pianist.

Whereas, her parents separated when she was only 6 years old and she moved to live with her maternal grandmother in Pennsylvania with her mother. Her father is said to be abusive to her and her mother, emotionally and physically.

Talking about Christina’s education history, she used to study in the Rochester Area School District and Marshall Middle School, Wexford.

In both the schools she was bullied because of her singing talent and for having appeared on the television.

Talking about her profession, in the year 1993, Christina Aguilera did ‘The Mickey Mouse Club’ with other celebrities like Ryan Gosling, Britney Spears, Justin Timberlake, etc. And, she was only 14 when she recorded her first song ‘All I Wanna Do’, a duet sung with a Japanese singer.

In 1998, Aguilera auditioned for the soundtrack of the animated movie ‘Mulan’. She recorded the song ‘Reflection’ and after that RCA Records signed her for a musical contract. In the year 1999, she came out with her debut album ‘Christina Aguilera’ and gave hit singles like ‘Genie in a Bottle’ and ‘What a Girl Want’ to the world.

In the year 2000, she sang a duet with Enrique Iglesias at the Superbowl XXXIV. ‘Mi Reflejo’ came out, her Latin-pop Album for which she learned Spanish. It had the hit single ‘Nobody Wants to be Lonely’, a duet with Ricky Martin. Similarly, in 2001, Aguilera did a single called ‘Lady Marmalade’ with other renowned singers like Lil’ Kim, Mya, and Pink.

Likewise, in 2002, her fourth studio album called ‘Stripped’ came out. In the year 2006, her fifth studio album ‘Back to Basics’ came out. She won a Grammy for ‘Ain’t No Other Man’. In 2008, Aguilera did Martin Scorsese’s documentary ‘Shine a Light’. It featured her performing ‘Live With Me’ with Mick Jagger. She also did a little cameo in the movie ‘Get Him to the Greek’ in the same year.

In 2010, Aguilera’s sixth studio album called ‘Bionic’ came out for which she collaborated with artists like M.I.A., Nicki Minaj, Peaches, etc. The album had hit numbers like ‘You Lost Me’, ‘Not Myself Tonight’, etc.  Similarly, in 2010, she did her first full feature film called ‘Burlesque’, it was a musical. Aguilera co-wrote many of the tracks for the movie and worked alongside Kristen Bell, Stanley Tucci, etc.

In the year 2012, Aguilera did her seventh studio album called ‘Lotus’. The album received mixed reviews from the critics and could not do very well commercially. It included singles like: ‘Your Body’, ‘Just a Fool’, etc.

She won Favorite TV Reality, Variety, or Comedy Personality or Act for The Voice (2011), Outstanding Song in a Motion Picture Soundtrack for Moulin Rouge! (2001), New Entertainer of the Year at ALMA Award, she won Female Artist of the Year, Top Latin Pop Album at Billboard Music Award.

She has an estimated net worth of around $160 million and she has earned that sum of money from her professional career.

There was a rumor that Christina did lip injection. Currently, she is far from rumors and controversies.

Christina Aguilera has a height of 5 feet 2 inches and she weighs 50Kg. Additionally, she has a measurement of 38-23-33 inches and her bra size is 34D.

Christina’s hair color is blonde and her eyes color is blue. Furthermore, her dress size is 4 (US) and her shoe size is 5 (US).