Updated On November 18, 2022 | Published By: Rounak Kumar
Share this
Married 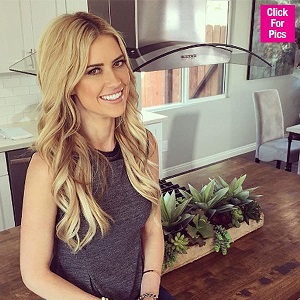 They had intimate wedding nuptials in an oceanfront ceremony in Maui, celebrating with 40 close friends and family.

The couple secretly wed in April 2022. They started dating in July 2021 and wed shortly after a year of having a romantic affair.

Lately, she was married to TV presenter Ant Anstead on Dec 22, 2018, at their Newport Beach home. They started to see each other in Nov 2017.

Through the Instagram post of March 22, 2019, Christine has revealed her pregnancy news to her fans stating that she is 15 months pregnant. This newlywed couple welcomed their child and named him Hudson London Anstead.

However, recently in late Sep 2020, this couple announced their split. She also deleted all her wedding pictures from her social media account. Then in June 2021, this former couple separated officially.

Previously, Christina was married to her boyfriend, Tarek El Moussa. They tied the knot on April 17, 2009. The couple has two children together. The first child is Taylor El Moussa who was born on the 22nd of December, 2010. She gave birth to their second child named, Brayden El Moussa in 2015.

Although they split up in May 2016, it was in January 2017 when they filed for divorce. This separation was finalized in Jan 2018.

After this, Christine dated contractor, Gary Anderson, whom she met during redoing his pool. This relationship did not last long and soon this affair ended.

Who is Christina Anstead?

Christina Anstead is a real estate agent. According to the timeline of Flip or Flop, she worked in real estate until the financial crisis in 2008. Afterward, she was into TV, flipping homes from start to finish. As of now, she is a popular TV personality.

Presently, Christina is a prominent figure in the media as the host of the TV series, “Flip or Flop”. Alongside her ex-husband, Tarek, she is running the show since 2013.

Christina was born in Anaheim in the state of California on July 9, 1983. She possesses American nationality and her ethnicity is Middle-Eastern.

There is no info about her parents but she has a sister named Carly Haack.

Her birth name is Christina Meursinge Haack. She grew up in Anaheim Hills, California, and spent her childhood there. Other than that, there isn’t other information about her early life and childhood.

As per her education or academic achievement, there are no records of what school or college she went to.

Afterward, she moved to do the TV stuff along with her boyfriend-turned-husband, Tarek. This was after the 2008 financial crisis. Presently, she does the hosting for the TV series, “Flip or Flop”.

The show is hosted by her and her husband. In the initial stage, she and her husband recorded a tape flipping houses which they sent to the HGTV. Fortunately, they liked the concept and gave them a green-lit to do the show, “Flip or Flop”. As of now, the series is in its 6th season.

Hall revealed on July 14, 2020, that she will collaborate with Spectra Furniture to produce a furniture line for the company. Christina HOME, the new line, will release in October 2020.

What is Christina Anstead’s net worth?

As of 2022, Christina Haack has a net worth of $25million according to the sources whilst her salary is not revealed yet.

Recently, in March 2017, she was part of massive criticism for posting a picture with her daughter. The reason for getting condemned was because she put her 7-year-old daughter in a bikini and posted it on social media.

Christina after the split-up has called her husband a pig for talking about sleeping with other women in the media. Consequently, this also made a huge controversy in the media.

After the divorce, her ex-husband Ant lost about 23 pounds.

How tall is Christina Anstead?

Christina Anstead has a height of 5 feet 9 inches. She weighs 58kg.

Besides these, her body figure measures the size 35-24-35 inches.

Her bra size is 33C. Furthermore, she has blonde hair and blue eyes.

What happened to Christina and Ant Anstead?

Their divorce was finalized in June 2021.

Why did Christina leave Ant?

They separated due to irreconcilable differences.

Who is Christina Anstead dating now?

She is currently married to a guy named Joshua Hall.
Caitlyn Jenner