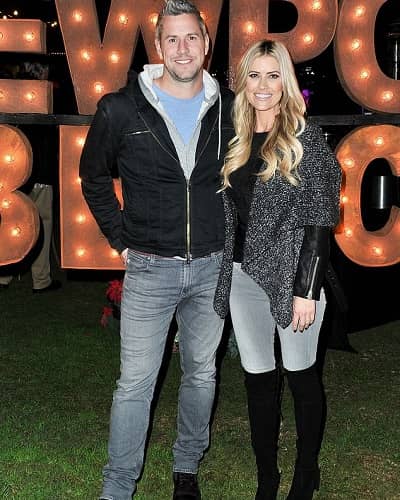 Christina on the Coast star Christina Anstead announced on 19th September that she is going to separate from her husband Ant Anstead of 21 months.

“Ant and I have made the difficult decision to separate. We are grateful for each other, and as always, our children will remain our priority. We appreciate your support and ask for privacy for us and our family as we navigate the future.”

Back in January 2018, Christina sparked dating speculation after she posted a selfie on New Year Day congratulating Ant on the U.K. premiere of Wheeler Dealers. Soon after they confirmed dating each other.

Christina who was previously married to Tarek El Moussa said in June 2018,

in October 2018, they celebrated their one year anniversary. Ant and Christina did not announce their engagement but walked down the aisle on 22nd December 2018. Their wedding was held at their West Coast home. Soon after Christina was seen rocking her gorgeous wedding ring during a family outing with her love and their kids in Anaheim, California.

Christina Anstead announced in March 2019 after few months of marriage that she and her husband Ant were expecting their first child together. She wrote on Instagram that their baby was coming in September. She was holding a picture of the ultrasound. Anstead showed off her tiny baby bump and updated her pregnancy the same month.

Happy 1️⃣ Birthday Hudson! Sweet, sensitive, busy boy … can’t wait for you to be chasing your siblings around the house soon 😎 – we love you 💙

In April 2019, Christina and Ant revealed that they are having a baby boy. Likewise, the couple welcomed their first child, son Hudson London Anstead on 6th September 2019. He was 7 lbs 7 oz 19.5 inches long at the time of birth. Hudson celebrated his first birthday on 6th September. Christina shared some of his pictures on Instagram and wrote,

“Happy 1️⃣ Birthday Hudson! Sweet, sensitive, busy boy … can’t wait for you to be chasing your siblings around the house soon – we love you”

Christina who is known to be a real estate investor and TV personality has an estimated net worth of $12 million. It is said that Christina and her ex-husband Tarek make $10,00 total per episode of the show Flip or Flop. By the third season, their pay was raised to $40,000 which made roughly $600,000 per season. Since 2019, she earns $50,000 per episode.

Similarly in March 2020, she released a book The Wellness Remodel which was in collaboration with nutritionist Cara Clark. Also, on 14th July 2020, she announced that she will be partnering with Spectra Furniture to create a new furniture line. Her furniture line Christina Home Designs will debut in October 2020.

Her husband Ant has a net worth of $5 million. Ant is an English TV presenter, car builder, designer, and an artist who presents at Channel 4 automotive television series For the Love of Cars with Philip Glenister. He has worked in TV as a presenter for Building Cars Live, Wheeler Dealers, Craft It Yourself, Ant Anstead Master Mechanic, and many more.

Ant Anstead is an English television presenter, car builder, designer, motor specialist, and an artist who is best-known for hosting the English Channel 4 automotive show ‘For the Love of Cars’. Read more bio…

California-born Christina Anstead is a real estate agent. According to the timeline of Flip or Flop, she worked as real-estate until the financial crisis in 2008. Afterward, she was into TV, flipping homes from start to finish. As of now, she is a popular TV personality.

Presently, Christina is a prominent figure in the media as the host of the TV series, “Flip or Flop”. She alongside her ex-husband, Tarek is running the show since 2013. Read more bio…

Kelly Dodd and her wedding plans! Her daughter will be her maid of honor!
Tags : Flip or Flop TV Personality