Best known for her lead role in the 2003 teen comedy film Love Don't Cost a Thing. 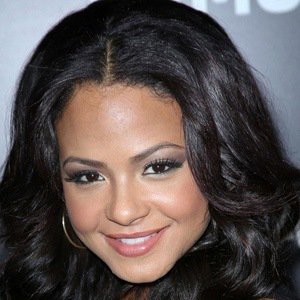 My favorite thing about motherhood is the outpouring of love that is non-judgmental and beautiful. My daughter just makes me happy, and she motivates me to be a kid again

I enjoy being happy every day, and hopefully you can hear my happiness in my music. Life is beautiful

I'm a grown woman. The haters are definitely wrong if they think I care.

Christina Milian is a divorced woman at the present time. She was previously married to the American actor The Dream. They got married on 4 September 2009.

After two years of their marriage, they divorced on 25 October 2011. They together had a daughter named Violet Madison Nash, born on February 26, 2010.

After her divorce, she began dating Jas Prince, an entrepreneur in 2013. The couple got engaged later in 2013. Their relationship came to an end in 2014.

After that, she began dating the rapper Lil Wayne in 2014 but their relationship was ended in 2015.

From 2017, this singer is in a relationship with French singer M. Pokora. She announced in July 2019 that she is expecting a baby.

Who is Christina Milian?

She is also popular for her second studio album, It’s About Time. She was named #30 on the Maxim magazine Hot 100 of 2005 list.

Christina Milian was born as Christine Marie Flores on 26 September 1981, in Jersey City, New Jersey, USA. Her nationality is American and she is of Cuban ethnicity.

She is the eldest daughter of Cuban parents Don Flores and Carmen Milian. She was raised in Waldorf, Maryland with her parents and siblings.

She has two younger sisters named Danielle and Elizabeth. Her family moved to Waldorf, Maryland, soon after her birth. Her parents divorced when she was 13 years old.

She was educated at Matthew Henson Middle School. Christina was interested in acting and singing since she was four years old. She began writing songs at the age of 17.

Christina began her career as an actress in 1996, playing Lana in the television film Sister, Sister. She also had a role in the TV film Smart Guy (1997-199).

She had her first series regular role as Tina Flores in Movie Surfers in 1998. She made her big-screen debut playing a small role in The Wood in 1999.

Her first lead role was in the 2003 film Love Don’t Cost a Thing, and she subsequently had main roles in Be Cool and the 2006 horror film Pulse.

She had a minor role in Ghosts of Girlfriends Past, and starred as the lead role in the straight-to-DVD film Bring It On: Fight to the Finish. Milian has since been cast in the 2010 ABC Family Original Movie Christmas Cupid.

In 2006, Milian released her third studio album So Amazin’. Her single, Say I peaked in the Top 30 of the US Billboard chart that year. She has been a successful actress and singer in her career and has won millions of hearts.

Throughout her successful career, she has accumulated a net worth of 4.5 million dollars. But there is no information regarding her salary.

Christina Milian is making headlines for her controversial behavior on Snapchat. She was criticized for her vulgar jokes and comments in front of children. She is also criticized by her own fans for making sexually suggestive jokes.

Moving towards Christina Milian’s body measurements, she has a good height of 5feet 2 inches (1.57m) with a bodyweight of 54kg. She has an hourglass body weight of 36-23-35 inches. Her bra size is 34 B, her dress size is 2 and her shoe size is 7. Her hair color is brown and her eye color is also brown.