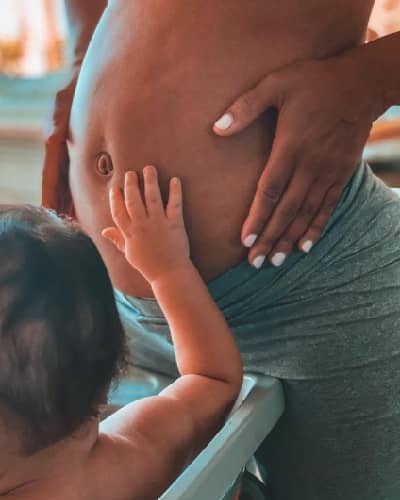 Baby No. 3 is on the way! Actress Christina Milian and boyfriend Matt Pokora are expecting their second child together. Christina shared a picture of her in a bikini showing her growing baby bump. In the picture, Matt kneeled down in the sand to kiss her bump while the sunset in the background.

The pregnancy news comes just 10 months after she had her baby boy Isaiah Tota with Matt. Fans started congratulating and showering love on her Instagram post. The family is turning to a family of 5 as she has a daughter Violet Madison Nash with her ex-husband The-Dream. They are yet to reveal the baby’s gender.

Christina Milian and Matt Pokora met at a restaurant in France in 2017. They started dating soon after. As a couple, they made the red carpet debut at the 2017 NRJ Music Awards in France. In August 2018, Matt decided to move to LA to be near her as they were tired of dating long distance. Christina said,

“We have the best time together. I could spend every day with him, every moment. It’s been cool! We just have a good time. I’m really happy with the type of person I’m with. He’s honest, and we have a really great relationship. This is different than anything I’ve ever experienced and I’m really happy that the universe brought us together,”

After dating for almost 2 years, they announced that they were ready to start a family. Christina was pregnant with her first child with Matt. In August 2019, they did a gender reveal of the baby and it was a baby boy. Their son Isaiah was born on 20th January 2020.

There were some engagement rumors of the couple after she was seen wearing a ring on her ring finger. But they are yet to get engaged.

How much is the net worth of Christina Milian?

Milian has appeared in a number of films and TV series like The Oath, Soundtrack. 90’s House, Grandfathered, Christina Milian Turned Up, East Los High, A Gifted Man, Falling Inn Love, Baggage Claim, Christmas Cupid, Bring It On: Fight to the Finish, Snowglobe, Be Cool, Man of the House, and more.

Likewise, Milian purchased a house in Woodland Hills in May 2004 for $1.165 million. The house consists of 5 bedrooms and 5 bathrooms. Likewise, Christina and her boyfriend Matt has a house in San Fernando Valley.

Also read Find out the reason why Teyana Taylor wants to quit the industry! Also, know about her married life, children, net worth, biography

Christina Milian is an American singer, songwriter, and actress. She is best known for her lead role in the 2003 teen comedy film Love Don’t Cost a Thing. Also, she is also popular for her second studio album, It’s About Time. She was named #30 on the Maxim magazine Hot 100 of 2005 list. Read more bio…

Zach Rance comes out as bisexual; had a relationship with co-star Frankie Grande!
Tags : Actress Singer