Christina Perri is an American singer. She gained recognition for writing and recording "A Thousand Years", the love theme for the film ‘The Twilight Saga: Breaking Dawn – Part 2’ (2012). She is married to her boyfriend, Paul Costabile. They have a child and expecting a second baby. 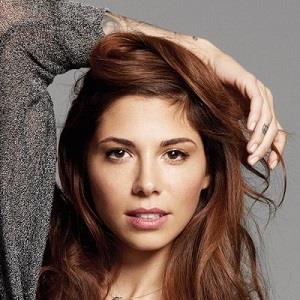 You need to love yourself and be yourself one hundred percent before you can actually love someone else.

Everything around me inspires and influences me. Mainly love - falling in it, losing it, loving it and hating it.

Yes, my first memory of singing, in general, was of a Christmas song. And then listening to Christmas music was really the first music I was ever connected to.

What is the relationship of Christina Perri?

From September 2014 to 2015, Christina was in a relationship with 28-year-old American Basketball player Chandler Parsons. She is currently engaged to her longtime boyfriend Paul Costabile who proposed after four years of dating.

Update: Christina is pregnant with her second child which she shared through her Ig story!

Christina shared the news on social media with a photo of her engagement ring and the caption: ‘Paul asked me to marry him tonight and I said yes!’. Paul is a host and producer in New York City, working for Staten Island Community Television and hosting a late-night comedy show called Gorilla Late Night in Times Square. The engagement was announced on 21st June 2017.

Who is Christina Perri?

Christina Perri is an American singer and songwriter who gained recognition for writing and recording “A Thousand Years”, the love theme for the film ‘The Twilight Saga: Breaking Dawn – Part 2’ (2012).  Her debut album Lovestrong was released in 2011. Her birth name is Christina Judith Perri.

Christina was born in Philadelphia, Pennsylvania on August 19, 1986. As of 2021, she is 35 years old. She is of Italian and Polish descent/ethnicity.

She spent most of her early life and childhood in Philadelphia itself until the age of 21. Her parents were Mary Perri(mother) and Dante Perri(father). As her father was from Italy and her mother was from Poland. She has an older brother too. His name is Nick Perri, who formerly played guitar with Shinedown, which is a rock band.

She attended Archbishop Ryan High School for her education purpose and graduated in 2004. She learned to play guitar at the age of 16. She attended college as a communication major for a year before dropping out to pursue a career in music.

Christina sang and acted in musical theater as a child. She moved to Los Angeles later on her 21st birthday. In the same year, she married and began to produce music videos for a living but the relationship didn’t last long. So she got divorced 18 months later and moved into a small apartment on her own to focus entirely on working on music. As she was missing her home and parents after the failed relation, she moved to Philadelphia by the end of 2009, she wrote “Jar of Hearts”.

Her first song “Jar of Hearts” was featured on ‘So You Think You Can Dance’, a reality show on June 30, 2010, in a performance by Billy Bell and Kathryn McCormick this helped in some way to launch her career in the music industry. The song became so big a hit that it sold 1,00,000 copies in a week and reached No.17 on Hot 100. She then signed a deal with Atlantic Records on July 21, 2010.

Christina released her debut album, Lovestrong, on May 10, 2011, and It debuted at number 4 on the Billboard 200, with first-week sales of 58,000 copies. Her second project Head or Heart Tour was released in 2014. From the movie The Twilight Saga, ‘A thousand years’ song of her album Lovestrong is one of the biggest hits in her entire career to date which reached No. 31 on Billboard Hot 100.

At the 61st annual BMI Pop Awards held in Beverly Hills, on May 14, 2013, Perri received the BMI award for her song “A Thousand Years”.

Christina Perri: Salary and Net Worth

Although the current salary Christina is not known, her net worth is estimated to be around $ 4 million.

Christina was involved in a controversy after granting a restraining order against obsessed fans during 2014. She was also a part of the celebrity death hoax in 2017.

Perry has been criticized for their immature choice of songs. As her songs are always limited to love, heartbreaks, boyfriend, etc. An interviewer when asked Christina about her song The Lonely, she replied,

“I didn’t want to be alone, so I decided I was dating loneliness, and he was my boyfriend”?