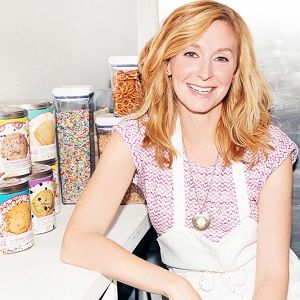 We always try to remember that at the end of the day, it's just cookies. Don't stress that hard, because it's a terrible thing to take home with you.

When did Christina Tosi and Will Guidara welcome their child?

Christina Tosi is a married woman. She got married to Will Guidara who is a restaurateur.

The pair welcomed their firstborn, a daughter in March 2021.

They got married at the romantic location of Cedar Lakes Estate in Port Jervis, N.Y on 30 July 2016. While their wedding event was going on, it started raining.

So the couple got married in the pouring rain and their guests were also enjoying the rain.

Their guest list was their close family and friends including model Karlie Kloss and her Momofuku founder David Chang.

One week of their wedding, the couple is a campground for an adventure.

Who is Christina Tosi?

Christina Tosi is one of the most well-rounded and desirable chefs in the world. She is also an author and television personality.
Tosi is the owner and founder of a milk bar which was titled, one of the most exciting bakeries in the country by the magazine bon appétit.
She is known for the way of changing the face of baking with her innovative techniques.

Christina Tosi was born on 9 November 1981 in Ohio, United States and she was raised in Springfield, Virginia. Her mother’s name is Greta Tosi-Miller, and she was an accountant.

Her father’s name is not given but he was an agricultural economist. Tosi’s nationality is American and her ethnicity is Italian-American.

She graduated from the University of Virginia, where she studied electrical engineering for a year. She also spent some part of her life in Florence, Tuscany, Italy.

Later she joined James Madison University and completed her graduation. Later, she moved to New York and enrolled in the French Culinary Institute’s pastry arts program after her graduation.

Talking about her career, Christina Tosi is the co-owner of the Momofuku Milk Bar which produced baked goods for five retail outlets in New York City, Washington DC, and one more in Toronto, Canada.

Tosi is well known for stoking apostolic fervor and in 2008, she opened the milk bar’s door.

She has made innovative baking and has made things like cereal milk ice cream, compost cookies, and crack pie. She is a member of the board of directors for hot bread kitchen and cookies for kids’ cancer.

Tosi is an adviser and an investor for those who are passionate about cooking like a museum of food and drink, and maple.

She has become a judge in the cooking competition shows like Masterchef and Masterchef junior which gets telecasted on the Fox channel. She has penned the cookbooks Momofuku Milk Bar and Milk Bar Life.

She was a finalist for the 2014 Outstanding Pastry James Beard Award for Rising Star Chefs as well as became a judge on the show MasterChef in the show’s sixth season and MasterChef Junior in the spin-off’s fourth season.

In addition, she appeared on Conan in April 2015. Her other business ventures include the Williams-Sonoma store where she began marketing cookies.

There were rumors that Christina would bring the best desserts on the show Masterchef.

It was a bit controversial when judge Bastianich left the show Masterchef and the pastry chef Christina replaced him on the judging panel. But later she did justice with her job.

Christina Tosi is a beautiful and very talented lady. She has light blond hair with green eyes.

Christina is active on social media and she keeps posting pictures of her mouth-watering pastries and other dishes to share with her fans and followers.

The world in recent era has not seen an economist like Paul Krugman. Click to know about the legend!