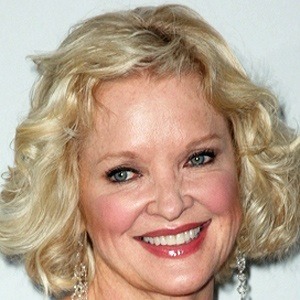 'Grey Gardens' consumed my life for over two and a half years. It really takes its toll on the family. I'm not there to tuck them in, help them with homework and eat dinner with them. When I work on a show, I only have about 20 minutes a day with my family.

I stay in my pajamas until I have to leave for work.

I've always been in love with Howard McGillen's voice, ever since I got wind of him.

What is the relationship of Christine Ebersole?

Christine Ebersole is a married woman. She has been married to William Moloney since August 13, 1998. The couple has adopted three children.

They are given names: Elijah, Mae Mae, and Aron. They have adopted those children since 1988. She currently lives with her family in Maplewood, New Jersey.

Previously, she was married to Peter Bergman in 1976. But, the couple could not hold the relationship and end with divorce in 1981.

Who is Christine Ebersole?

Christine Ebersole is an American actress and singer who is best known for her performances in ‘Sullivan & Son, and ‘One Life to Live.

Christine Ebersole has also made her appearances in the critically maligned film ‘Mac and Me’.

Who are the parents of Christine Ebersole?

She was born on February 21, 1953, in Chicago, Illinois, USA. Her father’s name is Robert “Bob” Ebersole and her mother’s name is Marian Esther.

She is an alumna of New Trier Township High School West, Northfield, Illinois in 1971. She received an honorary Doctorate from MacMurray College, class of ’75, and also, studied at New York’s American Academy of Dramatic Arts.

Christine Ebersole met Marc Shaiman and the musical director of her first club act. Then, she appeared in two spate parts on ‘Ryan’s Hope’ as a nurse in 1977 and as Lily Darnell in 1980. She was a cast member of ‘Saturday Night Live’ from 1981 to 1982. After that, she made her appearance in ‘One Life to Live’ and ‘Valerie’.

She appeared in the sitcom ‘The Cavanaughs’, ‘Rachel Gunn’, guest-starred on ‘Will & Grace’, ‘Just Shoot Me’, ‘Samantha Who, ‘The Colbert Report’, and appeared in the 1993 television movie adaptation of ‘Gypsy’ and in the 2000 ABC-TV movie ‘Mary and Rhoda’.

She performed with Michael Feinstein at his club in 2009, in a cabaret titled ‘Good Friends’. Also, she performed for two sold-out nights at Birdland in New York City with jazz violinist Aaron Weinstein and his trio.

In addition to that, she was also featured on ‘Bright Lights’, and ‘Big City’ concept albums.

She has an estimated net worth of around $2.5 million as of 2022, and she earns around a $75k salary from her professional career.

There was a rumor that whether she is playing the ultimate diamond, ‘White Diamond’, and it is now confirmed that she is in the show.

How tall is Christine Ebersole?

Christine Ebersole has a height of 5ft. 10 inches. She has blue eyes and blonde hair.

But, other information regarding Christine’s weight, body measurement, dress size, shoe size, etc. are not available.

To know more about Veronica Cartwright, Lisa Darr, and Hope Davis, please click on the link.

Tony Awards 2017! Things you need to know about the Tony Awards; Click to know whether your favorite celebrities attended the ceremony