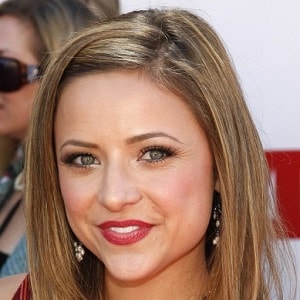 “I don't like kissing on camera. It's bad enough to be caught kissing by your parents. But when you have a whole crew watching you, it's a little weird.”

When in times of turmoil and breakup, do not cut or shave your head, because it will never end well.

I don't care how late it is, I will not go to sleep without washing my face.

What is the relationship of Christine Lakin?

Christine Lakin has been married to actor Brandon Breault since October 2014. The couple announced in November 2015 that they were expecting their first child.

They welcomed their first child, Georgia James on March 6, 2016, and their second child, Baylor B. Breault on September 10, 2018. She is currently residing in California, USA.

Prior to her marriage, she was in an affair with Andy Fickman for 9 years. Also, she was in a relationship with Jeff Juday.

Who is Christine Lakin?

Christine Lakin is a talented American actress. She is well recognized for her role as Alicia ‘Al’ Lambert on the 1990s sitcom ‘Step by Step’.

She was born on January 25, 1979, in Dallas, Texas, USA. Her birth name is Christine Helen Lakin and currently, she is 43 years old. Her name is derived from the Greek word which means anointed, a follower of Christ, and Guard.

Her father’s name is James Daley Lakin and her mother’s name is Karen. She was raised in Roswell, Georgia. She is the only child of her parent. Her mother’s ancestry is half Polish and half Czech.

She holds American citizenship and her ancestry is a mix of Belarusian-Jewish, English, Irish, German, Polish, and Czech.

Talking about her education history, she attended the University of California, Los Angeles, and graduated from there.

She started her acting career in commercials before she landed her first major role in the American Civil War drama ‘The Rose and the Jackel’ in 1990. She was cast on ‘Step by Step’ as Al Lambert a year before. The show was canceled in 1998 then she appeared in television movies like ‘Reefer Madness’, ‘Who’s Your Daddy?’.

She became the regular cast in MTV’s ‘Wild’s Out’ in 2006 and appeared in a commercial called ‘But He Has Bud Light’.

She made her appearance in the film ‘The Hottie and the Nottie’ alongside Paris Hilton in 2008. In that film, she required extensive makeup to make her ugly but the film received dismal reviews in the USA. She worked as a judge on the YouTube competition Internet Icon on the YouTube channel, YOMYOMF, alongside Ryan Higa.

She is also known as the creator of ‘Worst Audition Ever’ which was a lively evening of comedy. Lakin gave the voice of Jane in the video game ‘The Walking Dead: Season Two’.

She gave the voice of news anchor Joyce Kinney in the animated sitcom ‘Family Guy’ and currently, she stars in the Pop series ‘Hollywood Darlings’ alongside Josie Sweetin and Beverley Mitchell.

She has an estimated net worth of around $3 million as of 2022, and her main source of income is from her professional career.

She likes to keep her profile low. Therefore, she has not been engaged in any types of scandals and controversies in her career.