Christine Marinoni is a gay education activist and a TV personality who married Cynthia Nixon.

Christine Marinoni is a lesbian and has been married to a famous actress Cynthia Nixon. The pair met for the first time in an education fundraiser rally in May 2002. At that time, Cynthia was in a relationship with schoolteacher Danny Mozes.

Also, Cynthia has two children with Danny named Samantha (b. Novemeber 1996) and Charles (b. December 2002). In June 2018, it is revealed that Samantha is transgender. Cynthia and Danny’s relationship doesn’t work out and ended in 2003.

Afterward, Christine started dating Cynthia in the year 2004 and after around five years of relationship, the couple got engaged in April 2009. But, the pair didn’t marry and decided to wait for gay marriage to be legalized in New York.

On February 7, 2011, Marinoni had secretly given birth to a baby boy named Max Ellington Nixon-Marinoni. Max has born on the sixth trial before his birth Marinoni suffered multiple miscarriages. After gay marriage was legalized, the couple also got married in New York City on May 27, 2012. Currently, she lives in the NoHo neighborhood of Manhattan, New York City along with her wife and children. 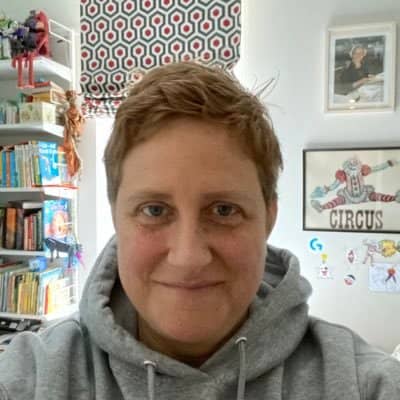 Who is Christine Marinoni?

Christine Marinoni is an American gay education activist and a television personality. Marinoni is a former director of New York’s Alliance for Quality Education. She is widely recognized as the spouse of actress, activist, and politician Cynthia Nixon.

Christine is fiercely a private person so, she has not revealed much about her early life and childhood. However, it is known that she was born in the year 1951 in Washington.

Christine’s dad was a university professor and her mother served as the president of the teachers union. Further, she hasn’t disclosed her parent’s and sibling’s identities in the media.

Moving towards her academics, she attended Columbia University from where she received a degree in economic development.

Talking about her nationality, she holds American citizenship whereas her ethnicity is unknown.

Christine came out as a lesbian in the year 1995 and soon after, she opened a lesbian coffee shop in Park Slope, Brooklyn. A couple of years later, one of her bartender staff left the job after becoming a victim of a hate crime.

Following that incident, she organized some events to highlight the issue of homophobia in the city. During the time, she had been dating her now-wife Cynthia and they worked together to bring awareness to anti-LGBTQ crimes. She spoke regarding the legalization of gay marriage in New York City.

Marinoni helped to found The Alliance for Quality Education (AQE) in New York and also served as a spokeswoman of the firm. From 2004 to 2008, she served as a senior advisor for community partnerships at the New York City Department of Education.

Christine has able to manage a clean profile till now. She hasn’t been part of any sorts of rumors and controversy that could hamper her personal and professional life.

Christine might have earned a fair amount of fortune throughout her profession but hasn’t yet disclosed any data about her net worth, salary, and other income.

According to tax records released in March 2018, Christine and her wife’s combined income is around $619,799 after a number of deductions. During the Mayor’s election campaigns, the couple donated the highest permissible amount of $4,950. According to the ‘Daily News’ report, Christine received $120,000 per year while working as an advisor for community partnerships at the New York City Department of Education.

Talking about her wife’s net worth, she has an estimated net worth of $25 million as of 2021. In the initial period of film adaptations of “Sex and the City”, Cynthia received $3 million in total salary. In January 2021, it is reported that Cynthia will be revived her role in”Sex and the City” for which she will receive $1 million per episode for the reboot.

Christine always cross-dresses as a man. She stands at the height of 5 feet 7 inches tall and her weight is around 78 kg. Likely, her chest, waist, and hip sizes are 34, 32, and 37 inches. She has blue pair of eyes with light brown hair. Her shoe size is 7 (US).

Christine is not very much a sociable person when it comes to social media sites. She is active on Twitter with nearly 133 followers to date. She has an Instagram account but she is not active on the account nowadays. Also, she is not available on Facebook.