Model Christine McGuinness is married and a mother of three.

Christine McGuinness is currently married to her husband Paddy McGuinness. Paddy is very popular in the entertainment industry as a charismatic TV presenter, host, and actor.

Christine met him back when she modeled for the boutique Cricket at the Liverpool Tennis Tournament. Soon after this, the two started dating and though their relationship was casual at first, it became more serious as time went by. After spending three years together, the two finally got married on the 4th of June, 2011 at Thornton Manor in Wirral.

Christine and Paddy have 3 children together. Two of them are twins, a daughter Penelope and son Leo born in 2013, and their youngest daughter Felicity was born in 2016.

The couple has revealed that all three of their children have been diagnosed with autism and that it takes a lot of effort to raise them. The couple recently celebrated their 10th anniversary and their marriage looks like it will last a lot longer as of now. 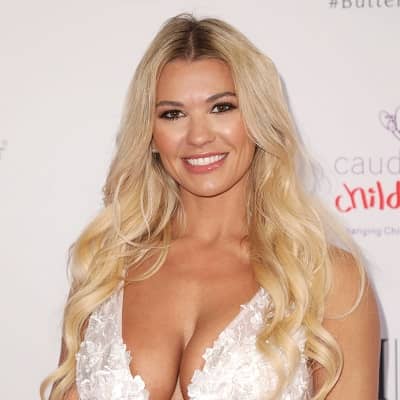 Who is Christine McGuinness?

Christine McGuinness is a popular English model and celebrity wife. She became popular after being crowned as Miss Commonwealth and as Miss Liverpool in 2007 and even now she is active in the modeling industry.

Christine McGuinness; maiden name Christine Martin; was born on the 20th of March, 1988 in Merseyside, England. As of 2021, her age is 33. Her nationality is English and she belongs to the Caucasian ethnicity.

Christine has not shared much information about her parents, not even their names. Still, we do know that she is very close to her mother as she visits her often and has professed her love for her mother several times. She was passionate about modeling from a young age and competed in beauty pageants even then.

As she has not revealed anything regarding her education, Christine’s schooling and educational qualifications are a mystery as of now.

Christine competed in a lot of beauty pageants in her teenage years. Eventually, she won the titles of Miss Commonwealth and Miss Liverpool in 2007, when she was 18 years old. Her talents were recognized and her modeling career took off from that point. Christine appeared in various events and fashion shows and even met her future husband Paddy at one such event. She maintained her figure after having children as well and is active as a model even now.

She models for various brands and clothes and is also a popular fitness model. Christine shares her exercises and routines with her fans her other secrets to maintaining a balanced figure on social media. Due to all of this, she is quite popular on social media. As of now, she has over 500k followers on Instagram and over 69k followers on Tiktok. On top of all this, Christine has also appeared on a number of reality TV shows such as The Real Housewives of Chesire.

Christine frequently appears in the news but she hasn’t been involved in negative rumors or controversies regarding her private or personal life. And though her marriage with Paddy has its fair shares of issues, the two have managed to work around it and are happy with their marriage as of now.

Christine stands at a height of 5 feet 10 inches tall and her weight is roughly 60 kilograms. She is blessed with great looks and has built a slim and attractive figure with body measurements 32E-27-34 inches. Christine actually underwent boob surgery to increase her breast size from 32D to 32E after having her twins. Her hair is naturally brown in color and her eyes are brown in color.

Get to know more about Katie Drysen and Sheryl Berkoff as well.