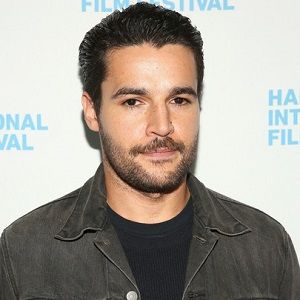 Doing a play, you have a little bit more time, obviously. You rehearse for a month before you get up in front of people. It's a totally different energy. With film, TV, you want to try to capture lightning-in-a-bottle moments. I don't try to rehearse as much with that stuff because you want those sparks of something to come out if they do.

In the future, I kind of like the idea of doing music for the film. I think that would be a nice job. I've always liked the sound aspect in movies. I guess once I have more instruments under my belt, it could be something I could do.

I was in 'Martha Marcy May Marlene,' and I got to do a song for the soundtrack.

Christopher Abbott is an unmarried man till now and is in a relationship. He doesn’t have a long list of girlfriends. He is currently in a relationship with famous British actress Olivia Cooke.

The couple began dating each other in 2015. Abbott and Olivia have been together for two years now and their relationship is going very well.

The couple is seen hanging out together and also supporting one another during award shows.

Who is Christopher Abbott?

Christopher Abbott is a famous American film and theater actor. He is widely popular for his role as Charlie Dattolo in the HBO series Girls (2012-2016).

He is also famous for his portrayal of James White in the 2015 movie James White. Abbott is also recognized for his roles in the movies Hello I Must Be Going (2012), The Sleepwalker (2014) and A Most Violent Year (2014).

In addition to movies and TV films, he is a theater actor. He has performed in both Broadway and Off-Broadway productions.

Christopher was born in February 1986, in Greenwich, Connecticut, United States. He is the son of Anna Servidio(mother) and Orville Abbott(father).

He has an older sister named Christina Abbott. His nationality is American and is of Italian, Portuguese, and Eastern European ethnicity. He spent his early life in Greenwich and Stamford.

He attended Norwalk Community College. After that, he studied acting at HB Studio. At the same time, he worked at a local video store and at his friend’s wine store. He moved to New York in 2006 to begin his career as an actor.

Christopher began his career as a theater actor in 2008. He made his acting debut in the play, Good Boys and True in 2008. After that, he appeared in the play Mouth to Mouth in 2008.

In 2010, he appeared in the play That Faces at the Manhattan Theatre Club. Abbott made his feature film debut in Martha Marcy May Marlene in 2011.

The same year, he made his Broadway debut in the play The House of Blue Leaves. He became popular when he appeared in the comedy-drama film Hello I Must Be Going (2012).

After that, he portrayed the character Charlie Dattolo in Girls from 2012 to 2013. He later reprised the role in 2016.

Christoper played the title character James White in the movie James White (2015). For his performance in the movie, he won Gotham Award- Best Actor. In addition, he earned a nomination for the Independent Spirit Awards- Best Male Lead in 2016.

He recently played the lead role Mason Tannetti in the series The Sinner along with the actors like Jessica Beil and Bill Pullman.

His movies Full-Dress, Sweet Virginia and Piercing are under post production. His net worth is $1 million.

Rumors are that Abbott is returning as Charlie Dattolo in the series Girls. The fans and other people criticized him for leaving the HBO’s series Girls even after his huge success. So there was a big controversy due to that in his career. Media has said that his departure was due to creative differences and that the decision was fairly mutual.

He has a height of 6 feet and a weight of 81 kg. He has a hair color is black and eye color is dark brown. There is no information about his shoe size, chest or biceps.