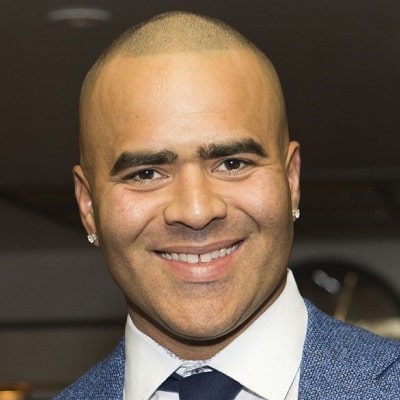 I'm used to multitasking... I like it that way. I like when things are busy. I strive off the pace

Christopher Jackson is a married person. He has been married to an American actress, Veronica Vazquez since 13th September 2004. His wife, Veronica is an American actress who is widely famous for his appearance on ‘B*A*P*S’ (1997), ‘Vieni via con me’ (2005) and ‘Soul Train’ (1971). The couple met for the first time through production of ‘In the Heights’.

The couple is blessed with two children; a daughter named Jadelyn Jackson and a son, C. J. His son, C. J had been diagnosed with autism. The family is currently living together and there is no sign of divorce between the couple.

Who is Christopher Jackson?

Christopher Jackson is an American actor, singer, musician, as well as a composer who is well recognized for depicting George Washington in the Broadway play Hamilton.

He was born on 30th September 1975 in Metropolis, Illinois, the United States of America. His birth name is Christopher Neal Jackson and his horoscope is Libra.

Christopher Jackson was born to mother Jane Adams who is a vocal music teacher. His stepfather’s name is Herbert Michael Hodges while his biological father’s name is still missing from the media. However, he has not disclosed his siblings’ name, early life, and childhood to the media.

Christopher holds American citizenship but his ethnicity is unknown.

He joined Cairo High School in Cairo, Georgia from which he graduated in 1993. After graduating from high school, he attended the American Musical and Dramatic Academy in New York City.

He started his career in the year 1995, starring Hair Fame composer Galt MacDermot in the Off-Broadway musical Time and the Wind. He made his Broadway debut in the original company of The Lion King while his other Great White Way credits include Bronx Bombers, Memphis and In the Heights.

Later, he took over the role of Simba in the year 2000. Furthermore, he is also a member of Freestyle Love Supreme which is the hip hop comedy troupe which includes fellow Hamilton artists Lin-Manuel Miranda and James Monroe Iglehart.

Moreover, his other movies and television shows include ‘Moana’, ‘Tracers’, ‘The Good Wife’, ‘Person of Interest’, ‘A Gifted Man’, ‘Oz Nurse Jackie’, and other many more.

In addition, he appeared as himself in ‘national Memorial Day Concert’ in 2019 and as Peter Rivera in ‘When They See Us’ in 2019.

Christopher Jackson has an estimated net worth of around $51 million and he has earned that sum of money from his professional career.

Christopher does not like to harm others and has not been involved in any rumors and controversies in his personal and professional life.

He has a height of 6 ft. and weighs 90 kg. Christopher has dark brown eyes and dark brown hair.