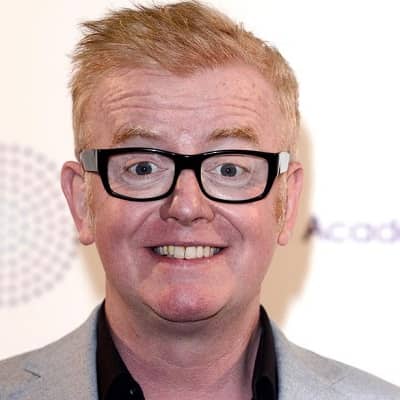 What is the relationship of Christopher James Evans?

He is married to Natasha Shishmanian, a professional golfer, model, and a columnist. The couple married in August 2007 in Faro, Portugal.

They also welcome their first son Noah Nicholas Martin Evans in 2009 and second son Eli Alfred Michael Evans in 2012. Further in September 2018, they have twins Boo and Walt.

Before this, Christopher was engaged to his girlfriend, Alison Ward. They also have a daughter, Jade together in 1986. Though after two years, they get separated.

He was married to Carol McGiffin, a British Broadcaster in the year 1991. The couple separated in 1994 and divorced in 1998.

He was also dating a teenage Popstar, Billie Piper in May 2000. Chris purpose her on his 35th birthday and the couple also married on 6 May 2001. Though they get separated and divorced in May 2007.

His name was also linked with various other personalities like Kim Wilde, Rachel Tatton-Brown, Anthea Turner, Geri Halliwell, Suzi Aplin, Melanie Sykes, and so on.

Who is Christopher James Evans?

Christopher James Evans is one of the popular English television presenters, radio DJ, businessmen, and voice actors. He is also a producer for radio and television.

His father’s name is Martin Joseph Evans, who is a health authority wages clerk. Likely, his mother’s name is Minnie Berdasall, who managed a corner shop. His father died due to colorectal cancer when he was just 13 years old.

He holds British nationality and is of Welsh ethnicity.

He has two siblings and he is the youngest one in all of them. His older sister’s name is Diane Evans and his older brother’s name is David Evans.

Chris has his schooling from Margaret’s Church of England Infants and Junior School. Then he completes his high school education at Junior School in Orford, Warrington.

He then studied at Boteler Grammar School.

Christopher James Evans started his career in the year 1983 working at Piccadilly Radio. He used to work there at his high school.

Up to 1984, he did several jobs like Assistant to Timmy Mallett, DJ at local pubs, and also worked at newsagents in sorting the deliveries.

He secured his full-time job at Piccadilly radio in 1984. Then he has been working as producer for many years. From 1991 to 1993, he worked at Round at Chris. In 1992, he worked as Too Much Gravy and The Big Breakfast. His other shows include The Superstation, Weekend Breakfast.

Chris produces his own radio and television production company called UMTV. He said if the show didn’t achieve success, he would the market stall. And as UMTV didn’t receive much success, he opened a market stall at Stables Market, Camden.

As Chris has always been a fan of cars, he has owned various cars of Ferraris. He is also the proud owner of Jaguar brand cars.

James has maintained a good relationship with everyone in his personal and professional life. And so, his name is out of all these rumors and controversies.

Christopher James Evans stands with a height of 6 feet 2 inches. He has blond or grey colored hair and blue colored eyes.