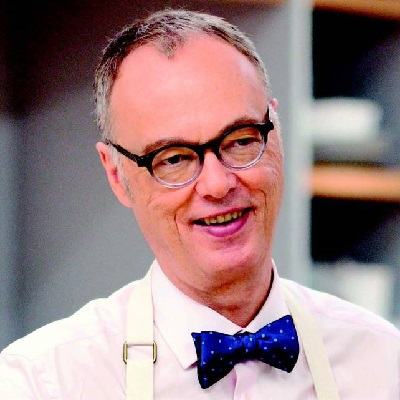 Google 'broccoli casserole' and make the first recipe you find. I guarantee it will be disappointing

Cooking is about putting food on the table night after night, and there isn’t anything glamorous about it.

The wedding took place on the 29th of June 2013 in Memorial Church in Cambridge, Massachusetts. The ceremony was performed by Robert M. Randolph.

The couple first met in 2002 during the interview for the post of his assistant. She was not selected at the time. Two months later, Kimball appointed her for the same post when his first assistant left the job. As time passed, they became good friends.

Before this, Kimball has married Adrienne Kimball in 1987. Together they have three daughters, Caroline, Whitney, and Emily Kimball, and a son, Charles. After more than two decades of marriage, they were separated in 2012 with divorce.

Prior to this, he was married too. However, this marriage has been a mystery until the date.

Who is Christopher Kimball?

American Christopher Kimball is Emmy Nominated chef, TV personality, and publisher. He is renowned as the host of Cook’s Country from America’s Test Kitchen.

He is also the author of the cookbook, Milk Street: Cookish: Throw It Together.

His father was Edward Norris Kimballand and his mother was Mary Alice White. They were of English ethnicity.

– After graduating from the University, Christopher Kimball started his career in a publishing company with his stepbrother. Following that, he joined The center for Direct marketing. At the time, he started taking cooking classes.

– Later, in 1980, he received an investment of $100 k and started his own Cook’s Magazine in Weston, Connecticut. Nine years later, he the magazine to the Swedish media group, Bonnier Group.

– After that, he co-founded America’s Test Kitchen. At the time, he was also the editor and publisher of the company. Along with the company, he published cooking-based magazines like Cook’s Illustrated and Cook’s country.

– In 2016, he left the organization and founded his firm, Christopher Kimball’s Milk Street on Milk Stree in Boston.

– Apart from that, he is also an author who has written 20 books until the date. Some of his books include The Cook’s Bible, The yellow farmhouse cookbook, and The Succession Wars: The Further Adventures of Victor Wroth.

With his career as a chef for more than four-decade, he has met the estimated net worth of $20 million. His earnings as a chef are in the range of $20k to $45k.

Apart from that, he also earns from his publishing house, Milk Street.

In 2016, he created the headlines in the media when he left America’s Test Kitchen. He left the company for establishing his new food media publishing company, Milk Street.

For that ATK slammed him with the lawsuit stating that Kimball was developing Milk street while he was an employee in the company. The lawsuit took around 3 years in 2019 to settle down.

For the settlements, he sold the major stock of ATK. Also, both of them stated that they will co-exist in the market.

Christopher Kimball has black eyes with black hair. His height is 6 feet and 5 inches and weighs around 65 kg.