Chrysti Ane is currently in a committed relationship with an actor Ryan Guzman. He is a model and MMA fighter too.  The couple started dating in the year 2016 and got engaged in 2018.

The couple is blessed with two children. On January 24, 2019, they welcomed their first child named Mateo Lopes Guzman. Similarly, they welcome their second child a daughter named Genevieve Valentina Guzman on January 8, 2021. 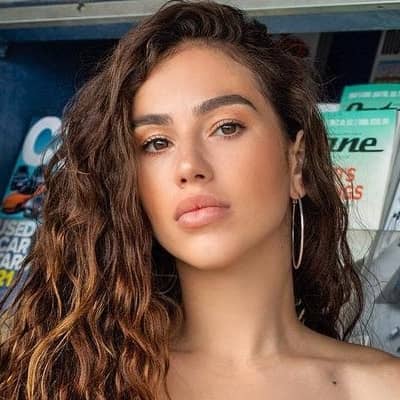 Who is Chrysti Ane?

Besides, she is better known as the wife of actor Ryan Guzman.

Chrysti was born on July 26, 1993, as Chrysti Lopes. She hails from Rio de Janeiro, Brazil and she moved to the United States at the age of six.

The actress hasn’t disclosed his parent’s and family member’s identity in the media. Talking about her academic background, she enrolled at Redonoso Union High School in Redondo Beach, California. Similarly, she studied acting at Aaron Speiser Acting Studio in Los Angeles, California.

Chrysti made her television debut through the Brazilian soap opera in season 21 of Malhacao in 2013. She portrayed the role of Meg in soap operas. In 2016, she appeared in a small role as Kayla in the TV movie ‘A Housekeeper’s Revenge’. She made her career breakthrough when she was cast in the American TV series Power Rangers Ninja Steel’ as the Pink Ranger, Sarah Thompson, in 2017.

On July 1, 2013, she released her debut EP titled Don’t Even Care. Apart from acting, she is a fitness model and also a social media influencer. She partnered with the US-based fitness company Fitonomy and appeared for a series of fitness videos. Moreover, she is the co-owner of the luxury fashion boutique Luxmafia.

Ane stays miles away from such controversial acts that create headlines in the media. She hasn’t been surrounded by such rumors and desperate scandals to date.

Ane might have accumulated amassed wealth from her profession but she hasn’t yet revealed her actual net worth and salary in the media. Talking about her husband’s net worth, he has an estimated net worth of around $1 million as of 2021.

As a fitness model, Ane has a well-maintained body physique. She stands at the height of 5 feet 2 inches tall and her weight is about 57 kg. She has dark brown hair color and a beautiful hazel pair of eyes.

Is Caitlyn Jenner in a relationship? Her previous married life, children, and affair before the gender transformation; Also know her heartbreaking plans for her own death