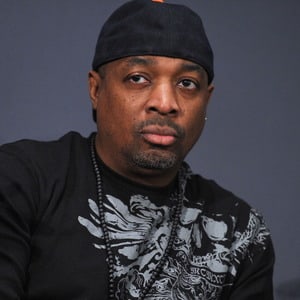 As a musicologist, and I consider myself one, there was always a great deal of respect for Elvis (Elvis Presley'), especially during his Sun sessions. As a black people, we all knew that. My whole thing was the one-sidedness like Elvis' icon status in America made it like nobody else counted. My heroes came from someone else. My heroes came before him. My heroes were probably his heroes. As far as Elvis being "The King", I couldn't buy that.

[on getting permission to enter Canada] We've had heavy security problems at the border since the 1990s. It's the roughest border on the planet. To me it resembles the Berlin Wall. I experienced having to be searched by cops and dogs coming through western Germany to go back to Berlin, and I'm here to tell you that that seemed more humane.

On Gil Scott Heron in 2010: You can go into Ginsberg and the Beat poets and Dylan, but Gil Sott-Heron is the manifestation of the modern world. He and the Last Poets set the stage for everyone else.

What is the relationship of Chuck D?

Chuck D is a married man. He is married to Dr. Gaye Theresa Johnson. She is an associate professor in the Department of Black Studies at the University of California.

This couple together has three children.

Who is Chuck D?

Carlton Douglas Ridenhour (Chuck D) is an American rapper, producer, and author. People mostly know him as the leader of the rap group ‘Public Enemy’.

He was ranked at No. 12 on The Source’s list of the Top 50 Hip-Hop Lyricists of All Time.

He became interested in the world of music since his childhood years and began writing rhymes at an early age.

Additionally, he is of American nationality. Furthermore, he belongs to an African-American ethnic background.

Eventually, he received a B.F.A. from Adelphi in 1984. Furthermore, in 2013, he also received an honorary doctorate from Adelphi.

Rick Rubin insisted on signing Ridenhour on his Def Jam label after hearing his demo track ‘Public Enemy Number One.

Since then, he has released several albums including ‘Yo! Bum Rush the Show’, ‘It Takes a Nation of Millions to Hold Us Back, ‘Fear of a Black Planet, ‘Apocalypse 91… The Enemy Strikes Black’, ‘Muse Sick-n-Hour Mess Age’, ‘He Got Game, ‘There’s a Poison Goin’ On’, ‘Revolverlution’, among others.

Apart from his career in music, Ridenhour has also appeared in several movies and television series.

He has appeared in movies, documentaries, and TV series like ‘Prophets of Rage au Zénith de Paris’, ‘The Bet’, ‘Heights Girl’, ‘30 for 30’, ‘Swing Lowe Sweet Chariote’, ‘The Playlist’, ‘Aqua Teen Hunger Force’, ‘The Quiet Arrangement’, ‘City Teacher’, and ‘Johnny Bravo’ among others.

Ridenhour is also politically active. He is on the board of the TransAfrica Forum.

Ridenhour has not revealed his current salary. However, he has an estimated net worth of around $14 million at present.

The rap group ‘Public Enemy’ has been surrounded by numerous controversies over the years. Additionally, Ridenhour’s several comments on social media have also been criticized many times.

Talking about his body measurement, Chuck D has a height of 5 feet 9 inches and weighs 75 kg.

Additionally, his hair color is black and his eye color is dark brown.

Chuck D is active over social media. He has a huge number of followers on social networking sites such as Facebook, Twitter as well as Instagram.