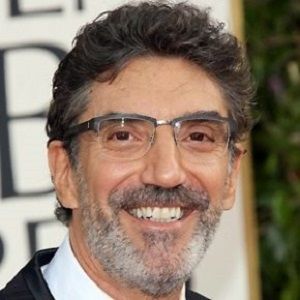 I work from a deep sense of insecurity. I have the belief, and I can't shake it, that there are endless reasons to turn the channel.

There are hundreds of channels and entirely other things to do besides TV. And if you make a bad television show there's no reason for the audience to come back the following week.

I believe that the Laws of Karma do not apply to show business, where good things happens to bad people on a fairly regular basis.

What is the relationship of Chuck Lorre?

Chuck Lorre is currently married to Arielle Lorre since September 2018. Later, on 2022, the pair filed for divorce.

He was first married to his business partner, Paula Smith in 1979. They had two children together. The couple was together for 13 years. They divorced in 1992.

After that, he got married for the second time in May 2001, to the famous actress and former Playboy Playmate Karen Witter. The couple stayed together for a decade and divorced in July 2010.

After that, he dated the beautiful Canadian actress and model Emmanuelle Vaugier for two years from 2010 to 2012.

Who is Chuck Lorre?

Chuck Lorre is an American television writer, producer, and composer. He is best known for creating some of the most famous sitcoms; The Big Bang Theory, Two and a Half Men, and Dharma & Greg.

Lorre is also an executive producer for Roseanne. He has won four BMI TV Music Awards for Two and a Half Men.

Chuck was born as Charles Michael Levine on 18 October 1952, in Bethpage, Long Island, New York, USA. His nationality is American and he is of Jewish ethnicity.

He belongs to a Jewish family. His father Robert Levine owned a small restaurant. He changed his surname from Levine to Lorre when he was 26 years old.

In which school did Chuck Lorre attend?

After graduating from high school, he attended the State University of New York at Potsdam.

Two years later, he dropped out of university to pursue his career as a songwriter.

After leaving school, Lorre toured across the United States as a guitarist and songwriter.

He wrote Deborah Harry’s radio hit single French Kissin’ in the USA for her 1986 Rockbird album.

The same year, he created his first show, Frannie’s Turn, but it was canceled after 5 weeks. He created his second show, Grace Under Fire, starring comedian Brett Butler in the year 1993.

He is also the executive producer of Mike & Molly.

He is also the creator of popular comedy series like The Big Bang Theory and Two and a Half Men.

Lorre’s third show was Cybill, which won a Primetime Emmy Award in 1995.

He has been a very successful person in his career and he has accumulated a net worth of 600 million dollars as of 2017.

According to 2020 reports, Chuck’s net worth is estimated to be $800 million.

Is Chuck Lorre involved in any rumors and controversies?

Rumors were that Chuck was into a potential run for 2020 after his speech in Golden Globes. He said,

“In that political structure – all the non-truths, the bulls—, the crap, the nastiness, the backhanded backroom stuff that goes on – I feel like I could not exist,”

However, he later said in an interview that the rumor is false and he is absolutely not interested in politics.

Chuck has a height of 5 feet and 10.5 inches and weighs 75 kg. His hair color is black and his eye color is brown.