Reflecting on a personal life of Chucky Atkins, he is a married man. He is married to his longtime girlfriend, Monica. There is no information on his marriage date or details. He has no children yet.

However, the couple is living a happy married life with no sign of divorce or an extra-marital affair. 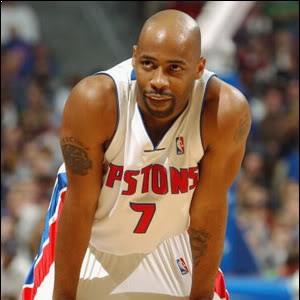 Who is Chucky Atkins?

Former professional basketball player Chucky Atkins was born in Orlando, Florida. He was born on 14 August 1974. He is of African American ethnicity and has an American nationality.

His birth name is Kenneth Lavon ‘Chucky’ Atkins. There is no information on his parents and siblings.

He studied at Maynard Evans High School in Orlando, Florida. After graduating high school, he attended the University of South Florida where he played college basketball.

Talking about the career journey of Chucky Atkins, he has been active in the professional basketball game since 1996 and he retired in 2010. He was undrafted in the 1996 NBA draft, so he started playing basketball professionally joining La Crosse Bobcats of CBA in 1996.

He also played for the Cibona Zagreb club in Croatia from 1997-1999. In 1999, he started playing in NBA after being selected by the Orlando Magic where he recorded an average of 9 points and 4 assists per game.  Then he started playing for Detroit Pistons and he was soon traded to Boston Celtics in exchange for Mike James.

In 2004, he was traded to Los Angeles Lakers in exchange for Gary Payton. In the 2005 offseason, he was again traded to Washington Wizards but he was soon released from the team. On 23 January 2006, he signed with Memphis Grizzlies replacing injured Damon Stoudamire.

Atkins signed with Denver Nuggets in July 2007 but he couldn’t play most of the matches his hernia injury. On 7 January 2009, he was traded to Oklahoma City Thunders and he was again traded to Minnesota Timberwolves on 27 July 2009. On 22 September 2009, he was released from the team and joined Detroit Pistons where he played almost 40 games.

On 27 September 2010, he signed with Phoenix Suns but soon he was released from the team on 11 October 2010. Then he retired from playing professional basketball and started as a coach at his alum high school. His success in his career path has paid him well financially.

Chucky Atkins: Salary and Net Worth

Unlike other players, he hasn’t been in any rumor but he suffered a controversy for his NBA draft pick.

Moving towards his body measurements, he has a good height of 5 Feet and 11 Inches (1.80m) with a body weight of 84 kg. He has black hair color and his eye color is also black. There is no information about his shoe size.

Also get to know more about the birth facts, education, career, net worth, rumors, height, and social media of different personalities like Latrell Sprewell, Anthony Davis, and Matt Barnes.