Chyler Leigh is an American actress. She is married and a mother of three.

Chyler is a married woman. Apart from her husband she had never been in any relationship with anyone. Chyler is married to Nathan West fellow actor from the series 7th Heaven. The couple first met in the year 2000 on the series set and had their affair. The couple engaged in drugs together.

But after certain period of time, they recovered and later got married on July 20, 2002. The couple shares a very romantic relationship and has three children including 1 son and 2 daughters named Noah Wilde, Taelyn Leigh and Anniston Kae respectively. The couple is very happily living together and there is no sign of any breakups or divorce between them. 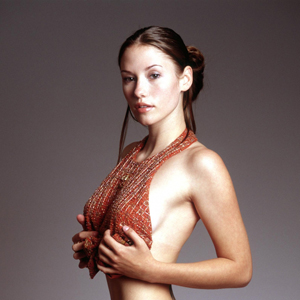 I don't like to do much with my hair - which is good, because I don't know how! I just always make sure I have a great haircut

It is important to find worth in yourself

At the risk of sounding too cliche, I found a really fantastic church. That is what keeps me grounded.

Who is Chyler Leigh?

Chyler Leigh is an American actress. She is known for her role in Grey’s Anatomy as Dr. Leixe Gray and in Not Another Teen Movie as Janey Briggs. She is also famous nowadays for her role in Supergirl as Alexandra Danvers.

His birth name is Chyler Leigh Potts. Her father’s name is Robert Potts and her mother is Yvonne Norton. Chyler was raised in Virginia Beach as their parents ran a business weight-loss club but the business was bankrupt after a few years. Her parents divorced when she was twelve. Her mother remarried her first husband and moved with him along with Chyler and her son.

Chyler was addicted to drugs along with her husband. But later they left it when the director of Not Another Teen Movie told her that she looked too thin. Their friend invited them to attend Christian Church Service which helped them to get rid of their addiction.

Chyler passed his high school exam from the California High School Proficiency Exam. Chyler didn’t mention much about her educational background. His nationality is American and his ethnicity is mixed(Irish, French, English, Danish).

Chyler’s career started at the age of 12 when she started modeling for various television commercials and magazine covers. Her on-screen debut was from the teen news show, Hall Pass where she worked as a co-host.

In 1997 she got a chance and debuted in the movie Kickboxing Acadamy as Cindy. Later, she moved to Los Angeles along with her mother to make her career grow in the line of acting. She got many roles in television series which include Saving Grace, Safe Harbor, M.Y.O.B., 7th Heaven, and Wilder Days.

In 2001 she got a chance to work in the movie Not Another Teen Movie, where she was seen in the lead role and the movie rocked at the box office. The same year she also worked on the music video Tainted Love. In 2002 she was cast in television series That ’80s Show for its 13 episodes as of June Tuesday.

Her character was very much praised. She also did 9 episodes of Girls Club as a lawyer, Sarah Mickle. Chyler was also nominated as the #65 Maxim Hot 100 Women of 2002. Her other role includes Claire Wyatt in The Practice, Kate Spangler in North Shore, Cassie in Rocky Point and Carla in Reunion.

In 2010 she worked in another top series that took a good height in her career, Grey’s Anatomy as Dr. Lexie Grey. Initially, she worked as a guest for its first 3 seasons, later she was the main cast of the series till its finale.

The series came to an end in 2012. She also worked in The 19th Wife, Private Practice, Brake, Window Wonderland, and Taxi Brooklyn. In 2015, she got a lead as Alexandra Danvers on the series Supergirl. Chyler also won the Young Hollywood Awards for the category Exciting New Face-Female in 2002.

Chyler Leigh: Salary and Net Worth

Her total net worth is estimated to be around $6 million as of 2022, and his salary is unknown.

She was once in a controversy when she stated that her time playing Lexie Grey on the hit ABC drama Grey’s Anatomy wasn’t “worth it. she told me that she was sometimes working sixteen hours a day, everyone had his cue, so sometimes we had eight or nine hours to shoot a single scene. It was exhausting.

Chyler has a height of 5 feet 6 inches. Her body weighs 55kg. She has brown hair and dark brown eyes. Furthermore, her bra size is 32B, shoe size is 8 US and dress size is 2 US. Her body measurements are 34-23-35 inches.