Ciara Riley Wilson is a popular American actress and dancer.

Ciara Riley Wilson is most likely single as of now. Ciara is really private when it comes to her love life and so we can’t be sure if she really is single. Although we can’t be sure of this, her activity on social media along with her interviews and media appearances, all suggest that she is single.

As she has not shared anything regarding her love life, there is no information on her previous boyfriends and relationships. 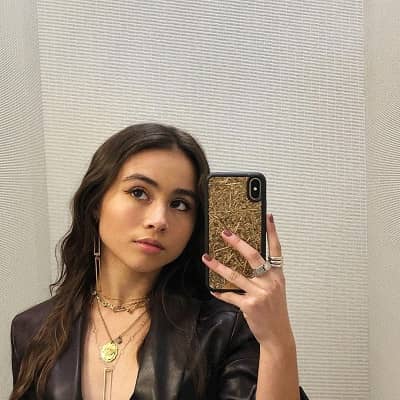 Who is Ciara Riley Wilson?

Ciara Riley Wilson is a popular American actress and dancer. She is best known for the role of Athena in Disney’s live-action movie Kim Possible.

And on top of her fame as an actress, Ciara is also a popular personality on social media.

Ciara Riley Wilson was born on the 26th of March, 2001 in Portland, Oregon. As of now, her age is 20. Her nationality is American and her ethnicity is mixed.

Ciara was born to her father Jay Wilson and mother Nanette Wilson. Her parents are very supportive and have helped her build her acting career. The entire family even moved to L.A. from Portland and this has certainly helped Ciara’s career as a whole. Ciara also has an older brother, Riley, to who she looks up to.

Talking about her education, Wilson has graduated high school and is currently in college pursuing a degree in Psychology. She has revealed this much but has not shared where exactly she studied in high school and where she is studying right now.

Ciara started working towards being an actress at the early age of eight. She did this with work in local TV commercials and radio voiceover ads. She also started her competitive dance career around this time.  After moving to L.A. with her family, Ciara got more opportunities to pursue a carer as a performer. She appeared in many TV shows like Henry Danger, Bizaardvark, Speechless, etc. after the move to L.A. And even though her roles were minor, this still helped her gain a bit of traction in the entertainment industry.

In 2019, Wilson finally made her film debut with Disney’s live-action movie Kim Possible. Ciara played a lead role as Athena in the movie and this role helped her gain a lot of popularity. Ciara also appeared in the recent TV show, L.A.’s Finest as Letti Ramirez. As a dancer, Ciara is part of Elite Dance Studio in Portland. She has even worked in music videos for popular artists such as Chris Brown, Gucci Mane, and Fifth Harmony.

Ciara Riley Wilson has not revealed her exact salary. As of 2022, she has an estimated net worth of $20 million. Still, with her career as an actress, many sources estimate her net worth to be in the range of 1 million to 5 million U.S. dollars.

Ciara has not been a part of any negative rumors surrounding her private or professional life until now.

Wilson stands at a height of 5 feet 1 inch tall and her weight is approximately 55 kilograms. She is blessed with good looks and has a slim and fit figure. Her hair is dark brown and her eyes are black. She has not revealed her body measurements as of now.

Also, get to know more about the lives of celebrities such as Amy Hill, Avaryana Rose, and Zuri Adele.