Cindy Ambuehl is an American actress and fashion designer. She is famous for her work in  Meet Wally Sparks, JAG, and The Naked. Truth. She is married to Don Diamont.

Cindy Ambuehl is a married woman. She is married to Don Diamont. He is best known for his roles as Bill Spencer Jr. on The Bold and the Beautiful and Brad Carlton on The Young and the Restless.

After nine years of engagement, the couple exchanged wedding vows on June 12, 2012, in Eze, France. About Cindy, Don has said,

“Cindy has a tremendous goodness — she has an open, warm, loving heart. There’s no ‘quit’ in her. She can take on any challenge. She is tenacious. She’s ‘Superwoman.” 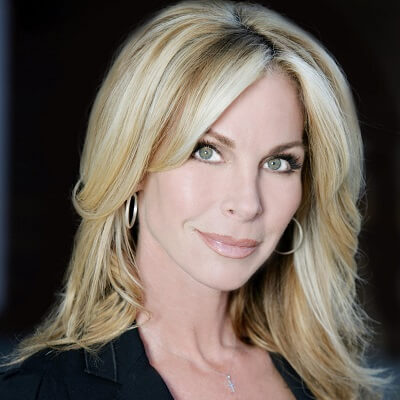 Who is Cindy Ambuehl?

Cindy Ambuehl is an American actress and fashion designer. She is famous for her work in  Meet Wally Sparks, JAG, and The Naked. Truth. Moreover, Ambuehl also grabbed the spotlight for being the wife of actor Don Diamont.

Cindy Ambuehl was born as Cynthia Jean Kolbo on January 31, 1965, in Los Angeles, California, USA. As of 2020, her age is 55. Ambuehl has revealed very little about her early life, childhood days, and family background. There is no information about her parents. Similarly, she has not revealed anything about her siblings and other family members.

She spent her childhood days in Los Angeles. Cindy was a tomboy for much of her childhood and in school, she once beat the class bully in a fistfight. Her ethnicity is Caucasian.

Talking about her educational background, Cindy attended a Grammar school. For studying drama, she joined the Juilliard School of Drama.

Cindy Ambuehl started her career as a model. She was signed as a model by the Judith Fontaine Modeling and Talent Agency. Later, she chose acting as her career.  In 1996, she appeared as Kim Swanson in ‘The Bold and the Beautiful’ and portrayed Valentine in ‘Head over Heels’ a year later.

In the 2000s, she made appearances in Rude Awakening, Ally McBeal, 18 Wheels of Justice, Charmed, Nikki, Son of the Beach, JAG, The Pursuit of Happiness, To Riverdale and Back, and Weekend Reunion.

Cindy has blonde hair and green eyes. She stands at a height of around 5 feet 8 inches. There is no information about her weight and body measurements for breasts, waist, and hips.

Cindy Ambuehl has an estimated net worth of around $1 million. There is no information about her annual salary yet. On average, an American actress earns around $40k per year.

Cindy has not been involved in any controversies. She has been able to keep herself away from any type of controversy and scandal. So far, she has not done anything controversial in her career. Similarly, there are no rumors about her of any kind.

You may also like to read the Bio, Career, Net Worth, Body Measurements, and more about Simone Garcia Johnson, Matt Gilroy, Don Diamont, and more.