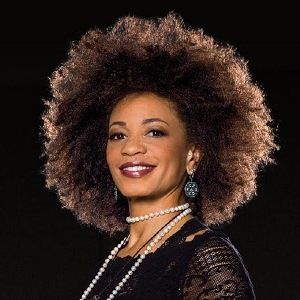 The life of music is bigger than all of us.

Cindy Blackman Santana has married a Mexican-born musician Carlos Santana. The couple dated for a while before Carlos Santana proposed to her at a concert in Chicago and got engaged on July 9, 2010. Later the same year, they got married on December 19.

Cindy is step-mother of three kids. They are Salvador Santana, Stella Santana, and Angelica Santana.

Who is Cindy Blackman Santana?

Cindy Blackman Santana is an American jazz and rock drummer. Likely, she was influenced early in her career by seeing Tony Williams perform. In the year 1997, she recorded the instructional video Multiplicity.

Cindy Blackman Santana was born in Yellow Springs, Ohio, the United States on November 18, 1959, and she is currently 59 years old. There is no information about her family. She spent her later childhood years in Bristol, Connecticut.

She has a strong musical background as her mother and grandmother were classical musicians, while her uncle played the vibraphone. Her mother played violin in orchestras during her young days, and her grandmother was a classical pianist. Her mother took young Cindy for classical concerts.

There is no information about her siblings. Cindy holds American citizenship but her ethnicity is unknown. Her birth sign is Scorpio.

She joined the ‘Berklee College of Music’ in Boston, where she studied under Tony William’s former teacher, Alan Dawson. She left her studies after 3 semesters, and in 1982 went to New York City, where she worked as a street performer.

Talking about her profession, in the year 1984, Blackman was featured on New York’s ‘King’s Crown Radio’ (WKCR – FM) in Ted Curson’s ‘Jazz Stars for the Future.’ Her compositions were included in Wallace Roney’s album, ‘Verses,’ in 1987. After listening to these compositions, ‘Muse Records’ offered her a recording contract. ‘Arcane,’ her debut creation as a bandleader was released in 1988.

During 1993, Lenny Kravitz heard her play and invited her to Los Angeles. She appeared for auditions along with 30 others and got selected. She recorded with him for his ‘Are You Gonna Go My Way.’ Blackman continued to play mainly as his touring drummer (Kravitz usually played his own drums while recording an album).

In the year 2004, she stopped playing for Kravitz’s group as she wished to concentrate on her own music. In 2014 she returned to play for Kravitz’s promotional tours for his tenth studio album, ‘Strut.’ Her first recording with a working group was for the album, ‘Telepathy,’ in 1994.

Her well-known 2010 album, ‘Another Lifetime,’ is a tribute to her mentor and inspiration, legendary drummer Tony Williams. It features three original tracks by Blackman and eight songs from Williams’ 1970s group, ‘Lifetime.’ Blackman enjoys playing jazz in small clubs. She tours around and conducts drum clinics. At the ‘2011 Montreux Festival,’ Switzerland, she was the drummer for the combined show of Carlos Santana and John McLaughlin.

She has an estimated net worth of around $10 million (as per 2019 data) and she has earned that sum of money from her professional career.

Also, read the affair, salary, the net worth, controversy, and the bio of Baxter Neal Helson, Jon Hill, Rian Dawson