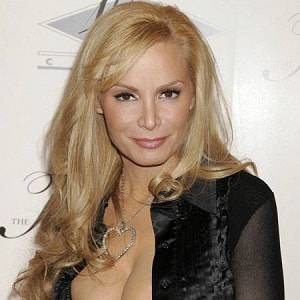 “So many celebrity websites you go to are so sterile that you know they just pay somebody to do it and there's not even an ounce of them in it.”

Cindy Margolis married Guy Starkman. He is a restauranteur. She gave birth to a son, Nicholas Issac in 2002. With the incubation of a surrogate mother, twin daughters Sabrina and Sierra were born in 2005. But, the couple separated in 2008.

Who is Cindy Margolis?

Cyndi Margolis is an American glamor spokesmodel and actress, who was crowned the Most Downloaded Woman on the Internet by the Guinness Book of Records.

Cindy was born on October 1, 1965, in Los Angeles, California, USA. Her birth name is Cynthia Dawn Margolis and she is currently 53 years old. Her father’s name is William C. Margolis and her mother’s name is Karyn O. Cindy holds American citizenship but her ethnicity is unknown.

There is no information available regarding Cindy’s education history.

She modeled for companies like Reebok, Vidal Sassoon, Coors, Frederick’s of Hollywood, Hanes, and Sunkist. She is best known as an infomercial among late-night television viewers. She appeared briefly as one of Baker’s Beauties in 1995 on the game show ‘The Price is Right’ and appeared as a fembot in ‘Austin Powers: International Man of Mystery’.

She emerged in the early days of the internet as a star and from 1996 to 1999 she was titled as ‘Yahoo! Internet Life’ magazine’s ‘Queen of the Internet’. Her pictures were downloaded 70,000 in a span of 24 years.

She teamed up with the World Poker Tour in November 2005 to become the new hostess for Chipleaders. She posed for the ‘Playboy’ in December 2006 and later posed for the second time in July 2008. She was to perform as a magician on CBS’s ‘Secret Talents of the Stars’ in 2008, but she did not get the chance because the show was canceled after only one episode was made.

She portrayed the role as an amateur against fellow amateur Jeremy Sisto and pros Jennifer Harman, Phil Laak, Howard Lederer,  and Chris Ferguson in the Pro-Am Equalizer poker tournament.

She won NBC’s ‘Celebrity Cooking Showdown’ in 2006 and teamed up with celebrity chef Wolfgang Puck to win both the first and final rounds.

She has earned a huge sum of money in her life who has an estimated net worth of around $20 million.

She posed for a nude photo session for the December 2006 issue of ‘Playboy’ but she said she was never completely nude.