Immobile is famous for playing as a striker for Serie A club Lazio and the Italy national team. 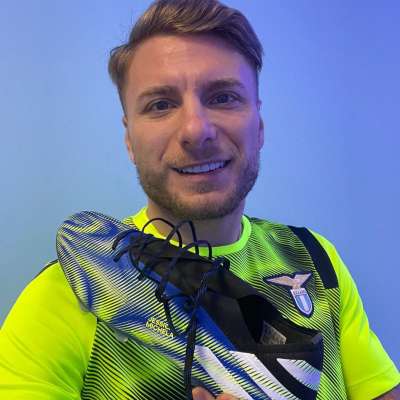 What is the relationship of Ciro Immobile?

About the relationship, Immobile is a happily married person. He had tied the knot to his long-term girlfriend, Jessica Melena. She is a model by profession. They married on 23 May 2014.

Furthermore, the couple has three children together, two daughters and a son. They are Giorgia and Michela. Their first daughter, Michela was born in June 2013.

Similarly, Jessica became pregnant for the second time with their second daughter in June 2015. Finally, the couple welcomed their son named Mattia.

Who is Ciro Immobile?

Ciro Immobile is an Italian professional footballer. Immobile is famous for playing as a striker for Serie A club Lazio and the Italy national team.

Ciro Immobile was born on February 20, 1990. At present, his age is 31 years old. Likewise, his birthplace is Torre Annunziata, Italy.

Ciro is the son of his father, Antonio Immobile whereas his mother is Michela Immobile. Further, he also has a brother, Luigi Immobile.

Talking about his nationality, he holds an Italian identity whereas his ethnicity is also Italian.

From a very early age, he was fond of football as he used to play football inside his room during the time. Regarding education, Ciro got enrolled in his hometown school football club Torre Annunziata ’88 when he was just five years old.

In regards to his professional life, Ciro could be able to come through the youth ranks of Sorrento and Juventus. After being a part of the Juventus U20 team, he then helped his side to win the 2009 Torneo di Viareggio.

Similarly, his league debut came on March 12, 2009. By the same token, his European debut was on 25 November 2009 in the Champions League.

Moreover, talking about some of his career activities in further years. In 2015, he scored his first Sevilla goal. His Lazio debut was on August 21, 2016, against Atlanta. In 2017, he lifted the Supercoppa Italiana and extended his contract with Lazio until 2022 the same year.

Astonishingly, he broke the record for most goals scored by a Lazio player in March 2018. Internationally, he represented Italy football teams at various age levels, Italy U20 and U21 football teams, and Italy at the 2016 UEFA Euro.

Ciro Immobile is playing for his country as a striker. The Euro cup matches will take place in different countries which are listed below:

From his profession as a football player, Immobile can earn a quite good amount of income.

Likewise, he also has an endorsement deal with Adidas. However, his details about assets are not available at present time.

Besides, Ciro Immobile has recently been involved in one of the controversies regarding the Covid-19 test issues. According to him, he was forced to miss two Champions League games due to positive Covid-19 tests. But, he said that his Covid test was negative.

Being furious with the situation, he had decided to launch a legal battle to protect his image as a person, and professional footballer as well. During that time, he had stayed in isolation and had waited for the green signal to join the Italy squad.

Other than this, he has not been part of other controversial matters or rumors till now.

As a professional sportsman, he has a great and attractive body structure with an athletic body build. He stands at a height of 6 feet. Also, Ciro has a balanced body weight of 72 kg.

Furthermore, he has blue-colored eyes whereas his hair is dark brown.

However, the athlete has not mentioned his other details in the public till now.

He is also active on Twitter with around 342k followers.

Moreover, Immobile is also available on Facebook with nearly 2 million fans and supporters.