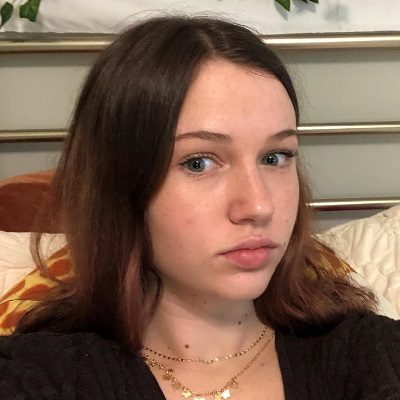 Claire Drake’s current relationship status is possibly single. However, she considers herself as a girlfriend of Ukrainian YouTuber, Taras Kulakov.

Who is Claire Drake?

American Claire Drake is a TikTok and Instagram Star. She is renowned for her lip-syncs videos on TikTok that went viral on the web.

Drake was born on the 5th of March 2005 in the United States. She is of Mixed (British, Latin, Germanic) ethnicity.

Till the date, she has not shared any details on her family background including father, and mother. She has an older sister, Julia Drake.

Details on her academics are not available. However, she is possibly attending High School.

Claire Drake started her social media career with TikTok. On the 26th of January 2019, she uploaded her very first TikTok duet along with another, TikTok Star, Michael Eckert via her TikTok account, bigballerclaire. In the very first video, she received more than 2.5k likes with 559 comments that were imagining and supportive. That inspired her a lot to make such videos.

Moving forward, she started making lip-syncs video. Along with the perfect expression, her comic timing those videos happens to be a center of attraction of those videos. Due to such interesting content, she gripped the attention of many people causing huge fans and followers on the platform.

Meanwhile, she dueted with other TikTokers including yodelinghaley. As of now, she has 1m followers on TikTok with 40.6m likes that are increasing with the time. As per the SocialBlade, the number of followers that she within the month of August 2020, is in the range of 32.4k.

After earning immense popularity, people curious about her life. Hence, she is receiving huge fans and followers on Instagram too.

As of 2020, she has an estimated net worth of $100 Thousand. The primary source of her income happens to be her Tiktok video. However, she also makes via brand promotion on Instagram.

Claire Drake has blue eyes with brunette hair. She stands at a height of 5 feet 3 inches and has an average weight.

Till the date, she has not been part of any sort of controversy and scandals that created a buzz in the media. Besides that, she has also maintained a distance from any sort of rumors too.

She has a self-titled YouTube channel with over 41.8k subscribers. She created the channel on the 16th of April 2016 and has more than 195.1k followers on the channel.

You may also read the bio of Jack Doherty, Sheri Easterling, and Don Benjamin.