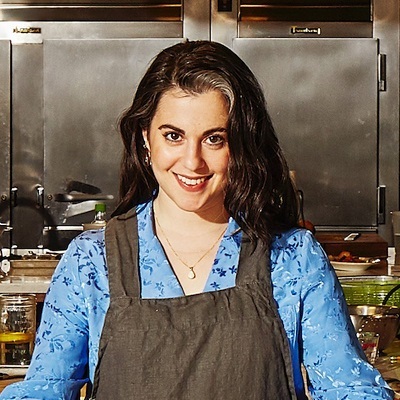 “I grew up in St. Louis, Missouri. As a kid, I was overly studious, overly serious, very academically driven. It was important to me on a cellular level to do well. And then I went to college at Harvard, and I relaxed a little bit. I was into writing, but I also liked doing things with my hands. When I think about why I ended up in food, it makes sense in retrospect. It’s creative, it’s working with my hands, but there’s also something very rigorous about it.'' ''If I’m recipe testing all day for my cookbook, and everything I’ve eaten has been sweet, then all I want at the end of the day is crunchy lettuce and something salty. I don’t cook much for myself anymore, now that I’m working on the cookbook. It’s a baking book, and it’s taking me longer than I thought because I have one oven, and everything has to get in line to bake. It’s set to come out in fall 2020, and I’m sure it will, because I can’t keep on doing this.''

Claire Saffitz is in relationship wither boyfriend, Harris Mayer- Selinger who is also a chef by profession. They live together in the Upper West Side neighborhood of New York City.

Who is Claire Saffitz?

She is currently working on her first cookbook to be published in 2020.

Claire Saffitz was born on 16th September 1986, in St. Louis, Missouri, the US as Claire Julia Saffitz. She is currently 33 years old. She grew up in her hometown, St. Louis. She is quite secretive about her family background, parents, and siblings.

She graduated from Harvard University in 2009 with a BA in American history and literature. Then she went to study French cuisine and pastry at Ecole Gregoire- Ferrandi in Paris, France. She did four months externship at the Spring Restuarant.

After the externship, she moved to Montreal, Quebec and studied at McGill University. She graduated with a master’s degree in History in 2013, where she focused on French culinary history in the early modern era.

After her graduation, Saffitz decided to pursue a professional chef as her career. She joined Bon Appetit in 2013 where she worked as senior food editor until August 2018. She rose to fame and became viewers favorite for her fantastic recipes.

The magazine also ran a youtube channel that has over 4.21 million subscribers as of 2019.

In 2017, Saffitz worked as a host for hit food tv series Gourmet Makes in which Saffitz attempts to recreate popular snack foods such as Doritos, Twinkies, and Gushers. Saffitz’s work has been described as taking “junk food staples and…elevating them from their humble processed beginnings into wonders of gastronomy. ”

Moreover, she has also earned a considerable fan following on her Instagram where she has over 439k followers as of 2019. She receives around $500-$1,000 per sponsored post on Instagram.

Saffitz has black hair and brown eyes. She is 5 feet and 4 inches tall with modest body weight.

You may also know about body measurements, net worth and early life of Chris Santos, Isaac Carew, and Erwan Heussaff.