On talking about her relationship, Stansfield was engaged to then-boyfriend Simon LeBon, the lead singer of the band Duran Duran in the early 1980s.

But their relationship could not last long and got separated. Currently, she might be living a single life happily focusing on her career. 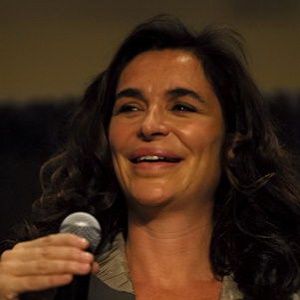 "Gary is just the sweetest man. He was very supportive of me and protective. I guess I saw that very passionate, slightly crazy side that he seems to vent in some bad ways sometimes. But I never saw anything but the good side of him, and I liked him very much."

[on her nudity in Sensation (1994)]: "[the movie] plays on cable all the time, and I've had guys come up to me in the gym and repeat intimate lines from my love scene. I went in to pick up my cleaning one day, and my dry cleaner gives me this smile and says, 'I see you on TV last night...' These are people I barely know, yet they know something very intimate about me and it makes me just want to go and hide. I've done my share of B-movies, but I really don't understand that 'Here come the tits' approach where they just parade them on and off the screen every 15 minutes. That's not sexy. It's just a way to keep the audience awake during a very bad movie."

[on Mind Ripper (1995)]: "It was the best cast and the worst script. What can you do? The whole thing was us running around in some underground hallway, holding a stick with a syringe scotch-taped to it and chasing a long-haired bodybuilder with this phallic thing that comes out of his mouth. It was just so silly. But the biggest challenge was trying to keep a straight face, before every take, we would chant 'Monster movie, monster movie, monster movie.' It was our own little mantra to psyche ourselves up to get through the scene without laughing."

Who is Claire Stansfield?

Claire Stansfield is a director,  actress, former model, and fashion designer. She is recognized for her performance in various episodes of the TV series Xena: Warrior Princess as “Alti”.

An actress was born to an English father and German mother in London, England on 27 August 1964. Besides, when she was very young, they migrated to Canada. So she takes herself a Canadian even though she has a British passport.

She grew up around the High Park area.

In talking about her educational background, before migrating to Hollywood, USA, she joined the Central School of Speech and Drama located in London.

In discussing her career, she served in Canada and Britain as a model before turning to act during her teen time. In addition to her appearance in Xena: Warrior Princess as “Alti”, she appeared in one episode of the show Frasier as “Kristina” and two episodes of the cult TV series Twin Peaks as “Sid”.

Moreover, she appeared as the humanoid android A.L.P.H.A. in one episode of the 1990s TV series The Flash. Also, she appeared in the fifth X-Files episode as a guest during season 1. Besides, she acted in the Angolan set film, Sweepers opposite Dolph Lundgren.

Furthermore, based on the short story of the same name by Dorothy Parker, she directed The Lovely Leave in 1999. Additionally, in 2002, she established a clothing line specializing in 1970s-style T-shirts, C&C California in partnership with Cheyann Benedict.

In discussing her achievements and awards, she might not have got any awards yet. She would be getting lots of awards soon in her life due to her successful career.

In talking about her salary and the net worth, she earns a huge amount of salary through her successful career but currently has not disclosed it to the media while he has an estimated net worth of $18 Million as of 2022, which he earns from his profession.

Though Claire is a successful personality, she has been a part of any controversies yet since she knows to maintain both her personal and professional life.

Thus, there are currently no such records available regarding her rumors and controversy.

She has a beautiful and attractive body with a height of 6 feet and 1 inch along with a body mass of 61Kg. Her body statistics have currently been unknown. She possesses black hair and light brown eyes.

Also, read the career, birth facts, family, childhood, net worth, controversy, and the bio of an actress, Gela Nash.