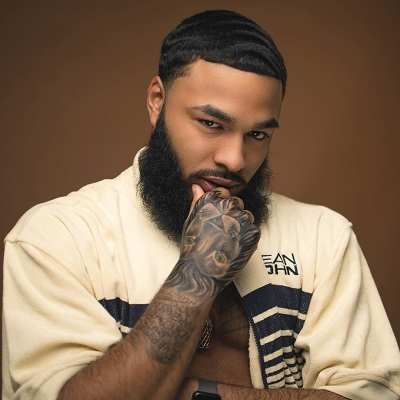 Clarence White is in a relationship with Queen Naija. His partner, Queen Naija is also a YouTuber.

They started dating each other in 2018. Together, the couple is blessed with a son, Legend Lorenzo (b. January 2019).

Who is Clarence White?

American Clarence White is an Instagram Star and YouTuber. White is renowned for his Instagram posts that went viral on the web.

Clarence White was born on 8th December 1993 in The Bronx, New York. He is of Mixed (British, Scottish, Irish) ethnicity with Puerto Rican roots.

To date, he has not shared any details on his family background including his mother and father. However, he has shared a picture of his mother via his Instagram post on the occasion of mother’s day in 2017.

Moving to his academics, he completed his High School Education at Mount Saint Michael High School. Later, he joined the Bloomfield College in New Jersey. Since his childhood, he also wanted to be a basketball player. Hence, he played basketball in High School and college.

While in High School, he was named as the Most Valued Player in City Championship. Also, he played for the basketball’s college team, Bears. At the time, he used to play as a point guard. Later, he gave his career as a basketball player.

As of 2020, he has an estimated net worth of $700 Thousand. His earnings as an Instagram Star are in the range of 5 digits figures.

Through his YouTube channel, he makes in the range of $3K – $47.3K. Besides that, through his secondary reaction channel, his earnings range from $7.9K – $126K. Also, he makes via his own clothing line, Designed By White.

He has black eyes with black hair. He stands at a height of 5 feet and 10 inches and weighs around 78 kg.

Talking about his appearance, he has a charming persona with oval-shaped facial features. Also, he prefers to have grown facial hair. Also, he has tattoos on his arms, chest, and shoulders.

To date, he has not been part of any kind of controversy and scandals that created headlines in the media. Besides that, he managed to maintain distance from any kind of rumors.

You may also read the bio, age, family, career, net worth, salary, and social media of Rachel Bush, Patrick Starrr, and Star Jones.