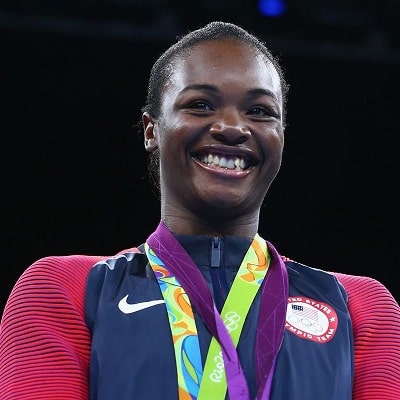 A woman can beat me the day I stop working hard. I work so hard in the gym, it would be stupid of me to doubt myself. For me, I know that I'm unbeatable. You can put me in there with whoever

Boxing gave me self-confidence that I didn't have growing up. When I was young, I was super quiet and I didn't trust anybody. I didn't like having friends

What is the relationship of Claressa Shields?

Claressa Shields is neither married nor in a relationship.

She doesn’t want to talk about her personal life with the media and has maintained her love life a secret so far.

Besides that, she attempted to adopt her cousin’s daughter named Clarissa Shield in 2014.

Moreover, Shield is an ambassador for Up2Us Sports, a national non-profit organization. It supports underserved youth by providing them with coaches trained in positive youth development.

Who is Claressa Shields?

Claressa Shields is an American professional boxer who became the unified world champion in two weight classes in June 2018.

In addition, she has won two Olympic gold medals in the women’s middleweight division.

She was born on 17th April 1995 in Flint, Michigan, the United States.

She was born to her parents Bo Shields (father) and Marcella Adams (mother).

Her father used to box in underground leagues however she has not disclosed anything about her siblings.

Claressa holds American citizenship but her ethnicity is African-American.

She began boxing from her coach and trainer, Jason Crutchfield at the age of 11. She won two Junior Olympic championships.

In the same year, she competed in her first open-division tournament, the National Police Athletic League Championships, won the middleweight title and also qualified for the U.S. Olympic Trials.

In addition, in April 2011, she set the record of 25 wins without any losses and also won her weight class at the Women’s Elite Continental Championships in Cornwall, Ontario against the three-time defending world champion, Mary Spencer.

At the 2012 Olympic Trials, she defeated the Franchon Crews, the 2010 world champion, reigning national champion,  and Pittsburgh’s Tika Hemingway to win the middleweight class.

Furthermore, Claressa won the fight against Sydney LeBlanc and Mery Rancier in all the eight rounds and headlined the “Detroit Brawl” on 16th June 2017.

Recently, on 5th October 2019, Claressa had a fight with Ivana Habazin for the WBO junior middleweight title in Flint, Michigan.

She won the gold medal in the women’s middleweight division after beating Russian boxer, Nadezda Torlopova 19-12 at the 2012 Summer Olympics in London.

One of her biggest achievements to mention, she won the World Championship gold medal in 2014 and in 2015, she became the first American to win titles in women’s boxing at the Olympics and Pan American Games.

She has an estimated net worth of $2 million and she earns around $800k as a salary.

In addition, she owns a car which she has recently posted in her Instagram posts.

She stands a height of 5 feet & 8 inches and weighs 75 kg. Also, Claressa has black hair with a pair of black eyes.