Clark Kellogg is a former basketball player and now is a sports commentator. He is married to Rose since 1983 and has three children with her.

Clark Kellogg has been married to Rosella Swayne. The couple exchanged vows on 9 July 1983.

His son Nick played basketball for the Ohio University like his father. His daughter is named Talisa and she played Division I volleyball at Georgia Tech University.

Clark has a third child a son named Alex. 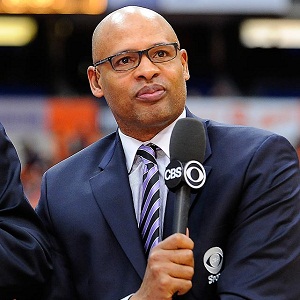 I loved all sports, but I really kind of locked into hoops when I was about 11, And that became my real passion, that’s what I enjoyed doing more than anything else.

Who is Clark Kellogg?

Clark Kellogg is an American sports executive, sports commentator, plus a former basketball player. He has been known for his endeavors as a basketball player for the National Basketball Association (NBA).

He started his basketball career from high school and has been hugely successful since then.

He was born on the 2nd of July, 1961. He was born in Ohio and also brought up there. His ethnicity belongs to All-American.

His father Clark was a police officer and his mother Mattie used to work at a hospital as a part-timer.

He was enrolled in the Chambers Elementary as well as St. Joseph’s High School for his education.

Clark began his basketball career from his high school and then he got enrolled at Ohio State University where he played basketball from 1979 to 1982 joining the university team.

Clark played for the basketball team of the University from 1979 to 1982. he also earned the All-big Ten Conference honors.

He went on to graduate from Ohio State University with a degree in Marketing. He continued to play basketball in college, again amassing multiple athletic awards and honors.

Clark Kellogg had a high school basketball career who was generally regarded as the finest in Cleveland’s history.  He continued to play basketball in college, again amassing multiple athletic awards and honors. The Indiana Pacers drafted him in 1982, and he excelled during his rookie season with the team. He was poised to become the next major NBA star.

However, severe knee problems forced him to retire in 1986. In the early 90s, he began working as a basketball analyst and has since provided analysis for ESPN, Big East Sports, the Prime Network, and CBS Sports. He is also the Vice President of Player Relations for the Indiana Pacers.

The state championship game to Columbus East brought the highlight was a 79–65 loss. He also gave his best in the Mc Donald’s all American and capital classic games. Kellogg played for Ohio State University, where he earned All-Big Ten Conference During the time period of four years i.e. from 1979-1982.

During that year, he achieved the most Valuable Player honors (1996). During the following year, he received his marketing degree. In June 2010, Ohio Gov. Ted Strickland appointed Kellogg to the university’s board of trustees, where he sits today.

Kellogg has done television analyst work for Cleveland State University, the Big East Television Network and ESPN. Currently, he serves as a game analyst for CBS’ coverage of college basketball and also works as a studio analyst during the network’s coverage of “March Madness.” He is a former first-round draft pick of the Pacers.

He retired after career averages of 18.9 points and 9.6 rebounds per game as well as a unanimous selection to the 1982 NBA All-Rookie Team. Chronic knee problems were the main reason behind his retirement. Kellogg was declared for the NBA draft in the year 1982 after his junior year of college. He was the 1st round draft pick of the Indiana Pacers. In his first season, he was selected as a member of the NBA All-Rookie Team.

He is one of only a handful of rookies in NBA history to have an average score of 20 points and 10 rebounds in a game. He was much taken as the next breakout NBA superstar. However, he only played three full seasons, and portions of two others, for the Pacers.

He had gone through chronic knee problems, this forced him to take retire.

As per the sources, the average salary received by a pro basketball player is around $7.7 million per year.

There was a rumor of Kellogg leaving the Pacers after 32 years. There are rumors which say he is gay (homosexual).

Clark Kellogg has a height of 6 feet 7 inches and weighs 102 kg.

He is bald and has eyes in dark brown color.