Talking about his relationship details, Claude Makelele is presently single and he is not dating anyone at the moment. He lives with his child named Kelyan, born in 2005.

Makelele was in a relationship with Noemie Lenoir in 2004. Lenoir is a French model who has worked with Gucci, L’Oreal, Next, Gap, Tommy Hilfiger, and so on. The couple however split in 2009.

Moreover, in May 2010, Noemie tried to commit suicide outside Calude’s Paris home by ingesting a lethal amount of drugs and alcohol. But, Makelele immediately stopped her from suiciding after he intervened in the situation and solves the matter. 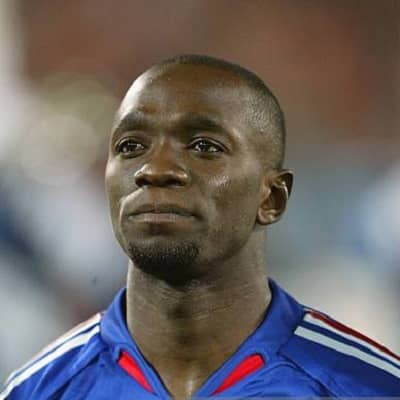 Who is Claude Makelele?

Claude Makelele is a well-recognized French football manager and former professional player. Makelele is currently a youth coach and technical mentor at Chelsea and was the head coach of Belgian First Division A club Eupen.

Claude Makelele was born on 18 February 1973. At present, his age is 48 years old. Likewise, his birthplace is Kinshasa, Zaire.

Claude is the son of his father, Andre- Joesph Makelele whereas his mother’s details are behind the curtain. Moreover, he has a brother named Patrick Makelele.

Talking about his nationality, Makelele holds a Congolese-French identity whereas his ethnicity is Congolese.

Regarding education, the athlete might have graduated from the university of the town. He has not revealed his academic background to the public.

Professionally Claude started playing football at the age of 15 and he signed for Sporting Melun-Dammarie 77. He played one year there and later joined the training center of Brest-Armorique in Brittany. At the beginning of the 1992-93 season, Makelele was already in the Nantes first-team then playing in the French first division.

In 2000, the star player signed for Real Madrid but his transfer was controversial because Celta did not want to sell Makelele unless a substantial improvement of their offer was made. Finally, Celta was forced to sell him €14 million. The star won two Spanish La Liga champions, the Champions League, the Supercopa de Espana, the UEFA Super Cup, and the International Cup.

Additionally, Claude signed for Chelsea for £16.8 million and finished second in 2003-04 FA Premier League and was eliminated by Monaco in the semi-finals of the 2003-04 UEFA Champions League. On 5 November 2006, Chelsea encountered Tottenham Hotspur where Makelele scored his second goal for the club.

Talking about his international career, Calude was first capped for France in a match against Norway in July 1995 and went on to represent his country at the 1996 Summer Olympics. However, he was not selected for France’s 1998 World Cup and Euro 2000. Later, the star debuted in the 2002 World Cup and soon he took retirement.

A famed French football manager has earned healthy money from his mentorship and sports career.

It is reported that Claude Makelele has an estimated net worth of $55million. In the summer of 2003, Makelele signed for Chelsea for £16.8 million.

However, the coach has not disclosed his exact salary, earnings, and assets details till now.

Claude has never been part of any controversial matter or rumors till now. The star has been preoccupied with his professional life.

It seems that Makelele prefers enjoying his personal life and does not want to merge it with his professional life.

48 years young coach, Claude has handsome looks and an admirable personality. He stands at a height of 5feet 9inches. Also, he has a balanced bodyweight of 66 kg.

Furthermore, Makelele has brown eyes whereas his hair is black.

Nevertheless, the sportsperson has never mentioned other physical details in the public yet.

Regarding his social media presence, Claude Makelele is an active personality on social media. Claude has more than 135k followers on his official Instagram account @makeleleofficial.

He is also active on Twitter with around 23.4k followers.

Moreover, Makelele is also available on Facebook with nearly 1.1 million fans and supporters.