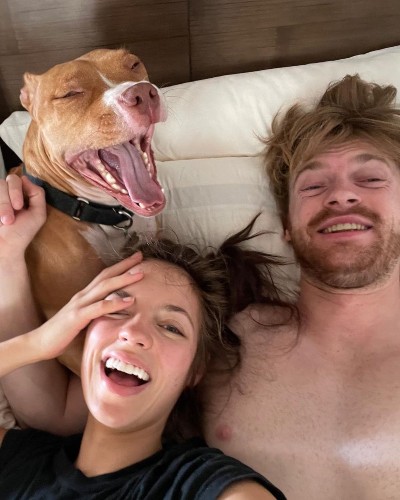 Claudia Sulewski and her boyfriend Finneas O’Connell celebrated their 3-years-old romance! Finneas showed love to his girlfriend on their third anniversary. He shared photos on his Instagram on 22nd September 2021 with their dog yawning at the camera and wrote,

“It’s not that I can’t imagine my life without you, it’s easy to- it would be a life with infinitely less joy and love and and laughter and purpose. A life I have no interest in. Best 3 years of my life. Happy anniversary my love, I’m so lucky to be yours,”

Sulewski being a romantic girlfriend herself shared pictures of the couple and some single pictures of her beau on Instagram. She wrote,

“3 years with my best friend god am i obsessed with you. mad for you. i love you eternally”

On her Instagram stories, Claudia posted a selfie with actor Patton Oswalt and his wife Meredith Salenger as a part of their third-anniversary celebration.

What is Claudia Sulewski’s age?

Claudia Sulewski was born on 19th February 1996 in Chicago, Illinois. She is 25 years old at present. Claudia is the daughter of Beata Krupinska Sulewski and Czeslaw Sulewski. Similarly, she has two brothers Kevin and Marcin. Her family is from Poland so she is fluent in both English and Polish.

How much is the net worth of Claudia Sulewski?

Claudia who is known for being a social media influencer and beauty guru has an estimated net worth of $1 million. She has a YouTube channel with 2.45 million subscribers. In 2014, she attended Beautycon in New York City, and in April 2014, she became Teen Vogue’s first YouTube host.

Claudia’s movies and tv shows include I Love My Dad, Deadcon, [email protected], Versus, The Commute, and more.

Claudia is an American actress and a social media influencer. She shares beauty and fashion tips on her social networking sites.

She once hosted a YouTube show organized by Teen Vogue. Read more bio…