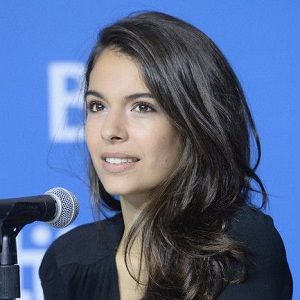 Claudia Traisac is in a relationship as of now. According to several websites, she is dating Josh Hutcherson. Josh is a young actor. Some of his hit films are the Hunger Games series, RV, Journey to the Center of the Earth, Escobar: Paradise Lost. The lovebird started dating in June of 2013.

Since then, they are living a happy life. Paparazzi have spotted them holding hands on several occasions. Similarly, they are seen having a casual date in many public places. They have been together for more than 4 years 8 months now. They work together in the romantic-thriller film, Escobar: Paradise Lost. Her fans really admire this relationship and wish it never ends.

Spain-born Claudia Traisac is an aspiring actress. She is a Spanish national. Mainly, she is famous for her acting performance in the film, Escobar: Paradise Lost.

Additionally, she is also popular for her work in the Spanish TV show, Cuéntame cómo pasó.

Claudia Traisac was born in the city of Leganés in Spain. She was born on January 7, 1993  as Claudia Hernández Traisac. Claudia was raised by her mother Rosa Blas Traisac. She is shy about sharing her personal life.

Subsequently, she refused to share details about her family background, ethnicity, childhood, and early life. For education, she went to some schools in Spain. Later, she started focusing more on acting.

Claudia Traisac is active since the early 2000s in the acting industry. In 2004, she acted in a Spanish film, El 7º día which translates The 7th Day in English. She portrayed the role of Isabel Nina in it.

Afterward, she made her debut on TV in 2006. It was in a Spanish drama television series, Cuéntame cómo pasó. The show is marketed as Remember When in English-speaking countries. She played the character of Vicky from 2006 to 2017. In 2008, she also acted in a show, 18. Additionally, in 2012, she also featured in a mystery fantasy television series, Luna, el misterio de Calenda.

Then in 2015, she joined the cast of the film, Escobar: Paradise Lost 2015. The film is a romantic thriller where she plays the role of Maria. Her boyfriend Josh also acted in the film. The same year in 2015, she also features in a TV show, Apaches. She appeared in a total of 12 episodes of the show as Vicky.

Furthermore, in 2016, she got to play the role of Elena in another Spanish TV series, La sonato del Silencio. Altogether, she acted in 12 episodes of the show. Presently, her salary and net worth are not disclosed.

Claudia Traisac is not part of any criticisms. She is a young actress who is giving her best to grow big in the industry. Apparently, this restricts her to involve in any controversial topics. As a result, she is away from any rumors and controversies as of now.

Claudia Traisac has a slim and attractive body figure. She stands at a height of 5ft. 4inch and weight of 51kg. Claudia Traisac tries to maintain her weight accordingly. She has dark brown eyes and hair. She wears a 32C bra size and her shoe size is 7.