Clive is a British actor. Clive Standen is married to Francesca Standen 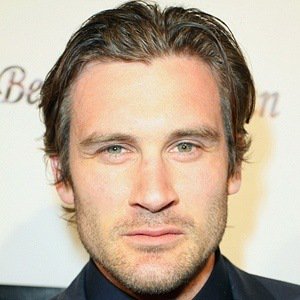 I've got children and it's still this one thing that I feel incredibly proud about, when my children are in the playground with their friends and they know about 'Doctor Who'. It's a great feeling. I can sit down with them and watch the new 'Doctor' with my kids

I prefer to stay in shape through doing activities I enjoy, such as climbing, hiking and exploring.

Clive Standen married to Francesca Standen in 2007, at Babington House. The couple has three children namely, Hayden Standen, Edi Standen, and Rafferty Standen and they are living a happy life together with no marital affairs.

Who is Clive Standen?

Clive is a British actor, Clive is well known for playing Bryan Mills in the NBC series Taken, based on the movie of the same name, as well as Rollo in the History Channel series Vikings.

Clive was born in Holywood, County Down, Northern Ireland on July 22, 1981, there is no information about his family. Whereas, there isn’t any information regarding his siblings. He belongs to British- Irish nationality and Caucasian ethnicity. His birth sign is Cancer.

Talking about his education and academic achievements he attended the King Edward VII School. Then, he attended Melton Mowbray College.

On talking about his profession, at the age of 15, he became the part of both the National Youth Music Theatre and National Youth Theatre.  On the following year, he also portrayed Charlie Halliday in three episodes of the British soap Doctors.

Whereas, his other TV work includes Zero Hour, Doctor Who, Robin Hood, and Camelot. Likewise, he has been playing the character of Rollo since 2013 in highly rated historical drama TV series Vikings. In fact, he also shared the screen alongside Travis Fimmel, Katheryn Winnick, Jessalyn Gilsig, and among others. Similarly, he is also portraying Bryan Mills in Taken since 2017.

After a year, he had also a role in the movie Tom Brow’s Schooldays. Besides that, he also gained widespread popularity after landing the supporting character Charlie Brown in the mainstream Bollywood movie Namastey London, featuring Akshay Kumar and Katrina Kaif. In addition, he also appeared in Hammer if the Gods, Everest, and Patient Zero. Likewise, he has also given his voice to the video games, Inversion, and Alien vs. Predator.

Clive has a net worth of $1 million and no detail information about the salary.

On talking about his body measurements, Clive has a height of 6 feet 2 inches. Additionally, he weighs is 82Kg. In addition, his chest, waist, and biceps sizes are 45-33-16 inches respectively. Clive’s hair color is brown and his eye color is grayish green.

Also, read the affair, salary, the net worth, controversy, and the bio of  Hugh Dancy, Timothy Dalton, Ian Dunn