Coby Cotton is a married person. He has been married to his long-term girlfriend Aubrey Ellet since November 30, 2017.

The couple has not shared any children to date. They seem to be very caring and supportive of each other. The pair is sharing quality time with each other and they are living happily without any rumors of extramarital affairs or divorce. 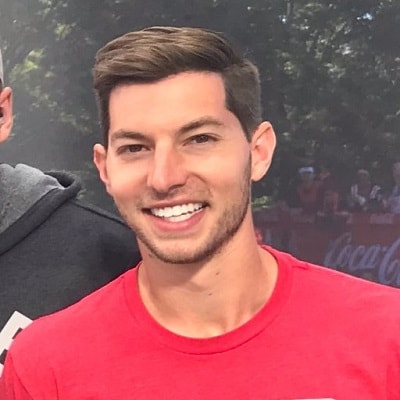 Who is Coby Cotton?

Coby Cotton is an American professional YouTuber. He is also a member of ‘Dude Perfect’ which is a Guinness World Record-holding group.

Coby Cotton has not disclosed the identities of his father and mother.

He has got a twin brother named Cory Cotton and a sister named Catherine Cotton.

Cody belongs to American nationality but his ethnicity is unknown.

He joined Texas A&M University from 2006 to 2010 where he was roommates with fellow Dude Perfect members.

Coby Cotton met Coddy Jones, Tyler Toney, and Garrett Hilbert during his University time. Along with his twin brother and these groups, they had the idea to film their basketball challenge in Toney’s backyard.

They created a YouTube channel and titled the video ‘Backyard Edition’ which they uploaded on their channel on April 8, 2009.

The video garnered over 200k views in just a week and gained fame. Then the group pledged to sponsor a child from Compassion International for every 100,000 views on their trick shot videos.

The group was invited to record a segment by ESPN and also appeared on many shows like ‘First Take’, ‘Pardon the Interruption’, ‘Around the Horn’ etc.

Furthermore, the group has launched games including ‘Dude Perfect’ in 2011, ‘Dude Perfect 2’ in 2012, ‘Endless Ducker in 2012, etc. The group is the holder of multiple Guinness World Records.

Coby Cotton has not been awarded and nominated individually for his work to date. However, his group has been successful in making several Guinness World Records.

The social media personality Coby Cotton has earned a huge sum of money from his YouTube career. However, the exact salary, income, and net worth have not been revealed yet.

Once during an interview with Good Morning America, it was asked whether the legitimacy of the group’s trick was real or not.

The members of the group replied that it takes multiple attempts at the shots when filming before they successfully convert the final shots.

Coby Cotton is famous as a social media star. He is an avid user of social networking sites like Instagram.

To know more about Joe Smith, Jeanie Buss, and Kristen Ledlow, please click on the link.