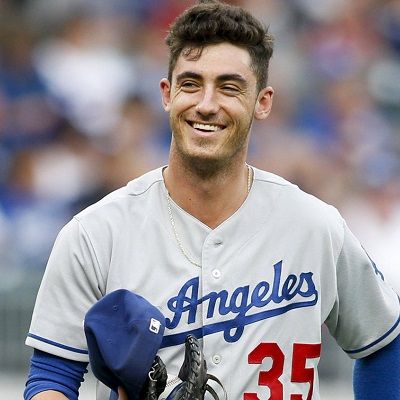 Cody Bellinger is linked to Melyssa Perez. Before, they did not confirm being in a relationship. But TMZ reported in August 2017 that these two are dating each other. Similarly, they were spotted enjoying the PDA moments after Dodgers-White Sox match back in August 2017.

Now it is known that the two are in a relationship with each other.

Who is Cody Bellinger?

Cody James Bellinger known as Cody Bellinger is an American professional baseball first baseman. He is an outfielder for the Los Angeles Dodgers of Major League Baseball(MLB). Similarly, he was named an All-Star and the National League’s Rookie of the Year in 2017.

He was born on 13th July 1995 in Scottsdale, Arizona. He is the son of Clayton Daniel Bellinger(father) and Jennifer Bellinger(mother). Similarly, his father is a former MLB player who played for the teams like the New York Yankees and the Los Angeles Angels.

Likewise, he has two siblings Ashli Bellinger and Cole Bellinger. His younger brother Cole drafted in the 2017 MLB by the San Diego Padres.

Besides, he belongs to American nationality and his ethnicity is mixed(French, German, and Greek).

Talking about his education, he attended Hamilton High School in Chandler, Arizona.

He played in the 2007 Little League World Series for the Chandler, Arizona team and played high school baseball at Hamilton High School in Chandler. Similarly, he was a 2013 Rawlings-Perfect Game 2nd Team All-American.

Cody Bellinger was drafted by the Los Angeles Dodgers in the fourth round of the 2013 Major League Baseball draft and signed with them on June 13, 2013. In the year 2014, he was promoted to the Ogden Raptors of the Pioneer League and despite dealing with a shoulder injury early in the summer he hit 328 in 46 games for the Raptors.

Likewise, he played in 2015 with the Rancho Cucamonga Quakes and was selected to the mid-season California League all-star team as well as the post-season all-star team. He got off to a hot start in 2019, and on April 26 he hit his 13th home run of the season and set a new MLB record with 88 total bases before the month of May, a record previously set by Chase Utley with the 2008 Phillies.

There were rumors of Cody dating Melyssa Perez before they confirmed about it.

Talking about Cody Bellinger’s body measurements, he has a height of 6 feet 4 inches and weighs around 95 kg. His hair color is brown and he has hazel color eyes.

The baseball game runs in the family! Cody Bellinger and his career, family life, and girlfriend!