Cody Decker is a married man. He is married to his longtime girlfriend, Jenn Sterger. She worked as an air hostess for the New York Jets. They were engaged before they tied the knot. The couple married on 20 January 2018 in Los Angeles, CA. His best men were his close friends: Jesse Field, Brent Dean, Sam Fusaro III, and Jesse Kivel.

The couple looked very happy after their wedding as he uploaded his and his newlywed wife’s party picture on his Twitter account. 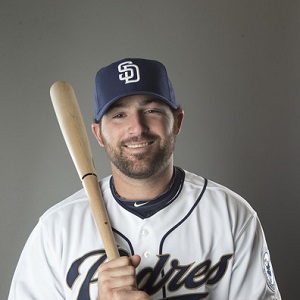 Who is Cody Decker?

Cody Decker is an American professional baseball player. He currently plays for the New York Mets organization. In the past, he had also played for the San Diego Padres in Major League Baseball (MLB).

Cody Decker was born on 17 January 1987 in  Santa Monica, California. His nationality is American and his ethnicity is Jewish.

He is the son of Jay(father) and Terri Decker(mother). He has an older brother, Jesse, and an older sister, Jenifer.

He attended high school at Santa Monica High School in Santa Monica, California. Later, he went to the University of California, Los Angeles (UCLA) on a baseball scholarship. He majored in History and minored in Film.

He started his career in 2009 after he graduated from the University, he batted 354 (3rd in the league) and led the Arizona League in home runs (15), and had the best fielding percentage for a first baseman, while playing for the Arizona League Padres. In 2010, Decker was fourth in the California League in home runs sixth in doubles (35), seventh in RBIs, and ninth in walks (60), with the High-A Lake Elsinore Storm.

After playing these games he was named a MiLB.com San Diego Organization All-Star and MiLB.com Short-Season Best Hitter of the Year with the Arizona League Padres.

But he was not active in 2011 due to a severe third-degree right ankle sprain. So he had to rest until 3 months without playing the game. Then in 2012, he again joined Texas League where he made 25 home runs, third in slugging percentage, and tenth in RBIs with the AA San Antonio Missions. In the 2013 season between San Antonio and Tucson, he hit 19 home runs with 70 RBIs, he became third in the Pacific Coast League in slugging percentage.

Similarly, in 2014, Decker tied for fourth in the Pacific Coast League in home runs with 27 for the AAA El Paso Chihuahuas and led all Padre’s minor leaguers with a homer. Due to this, he was named the 2014 MiLB.com San Diego Organization All-Star. In 2015, he was a PCL mid-season All-Star with El Paso, and a MiLB.com San Diego Organization All-Star, and he had signed with the Kansas City Royals which trade him to the Colorado Rockies on April 20, 2016, who released him on May 17, 2016. On June 13, 2016, Decker signed a minor league deal with the Boston Red Sox, which had assigned him to the Portland Sea Dogs in the AA Eastern League.

In January 2017, Decker had signed a minor league contract with the Milwaukee Brewers which had converted full-time to catcher. Decker had been managed by Pat Murphy, the Brewers bench coach, when both of them were in the San Diego Padres system and they released him on March 27. In April 2017, Decker had again signed with the New York Mets to a minor league deal, and he is currently playing for the Binghamton Rumble Ponies. He was the leading active career minor league home run hitter at the time, with 173.

Apart from playing baseball, he has also made short films, prank videos, etc. Through these, his fan followers are increasing day by day.

Cody Decker: Salary and Net Worth

Cody Decker is titled to be the most interesting man in the world because he can play, act, sing, host, and much more. Controversies are that Cody is said to be an unprofessional player.

Cody’s hair color and eye color are brown. His height, weight, and shoe size are unknown.