Youtuber Cody Jones is married and a father of three.

Cody Jones is a married man. He is married to Allison M. Jones. The couple started dating in February 2009 after meeting at Texas A&M University.

After dating for more than a year, the couple exchanged wedding vows on August 6, 2010. From their marriage, they have three children. In June 2016, Allison gave birth to a daughter named Landry, in July 2018, they welcomed their second daughter, Lucy, their third baby Easton born in December 2020. 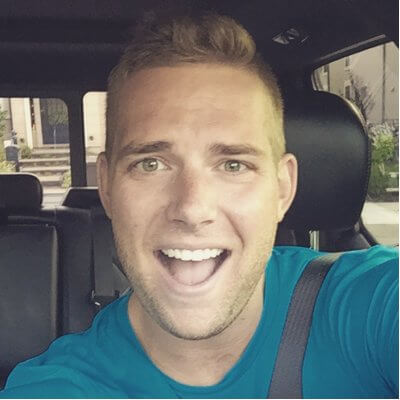 Who is Cody Jones?

Cody Jones is an American Youtuber who is famous as one of the five members of the extremely popular Youtube channel, ‘Dude Perfect’.

The channel has over 56.7 million subscribers making it one of the most popular Youtube channels in the world and has earned fame for its sports trick shots and comedy videos.

Cody Jones was born on October 9, 1987, in Plano, Texas, US. As of 2021, her age is 33. Although he has not revealed much about his family background, they were a religious Christian family who used to go to church every day.

However, by the end of high school, he stopped going to the church because according to him, he was more into girls and basketball.

Regarding his educational background, he went to Texas A&M University where he studied finance and real estate.

While attending Texas A&M University, he came together with his friends, Coby and Cory Cotton, Garrett Hilbert, and Tyler Toney to form the entertainment YouTube channel, ‘Dude Perfect’ in June 2009.

The five friends posted trick shots of basketball, ping pong, and others. Their content was new and got people excited making their channel’s popularity grow with millions of views in their videos.

Their subscribers’ count also went up in a short period of time after which they started landing professional endorsements. Then, they traveled to the UK for a video segment with professional footballers of Manchester City F.C, Arsenal F.C., and Chelsea F.C.

In 2015, the five friends landed a TV deal, and their series titled ‘The Dude Perfect Show’ premiered on CMT in 2016 and was aired on Nickelodeon channel for its second season.

Their channel remains one of the most popular channels on Youtube as of August 2021, with over 56.7 million subscribers. Their most popular video titled ‘Water Bottle Flip 2’ has gained over 314 million views.

Other popular videos include trick shots of Ping Pong, Real Life, etc. As of 2021, their video views have crossed 11 billion.

The legitimacy of their trick shots which was the main cause of their fame in the early years has been questioned over the years.

Good Morning America even hosted a segment about the tricks’, however, the experts could not find evidence of the tricks being fake.

The tricks are legitimate although people have tried to prove that they are fake. The members have responded to these claims saying they are good for publicity and make their tricks look even more impressive. However, they have admitted that the tricks take multiple attempts to convert the final shots.

Jones stands at a height of 6 feet 6 inches and weighs around 70 kg. His hair color is brown and similarly, his eyes are also brown in color.

You may also like to read the Bio, Career, Net Worth, Social Media, and more about Coby Cotton, Cory Cotton, Luke Bryan, and more.