Came into the spotlight when he auditioned as Mary Poppins in what would be the first #6secondauditions video in social video app Vine.

Cody Ko is engaged. He is engaged to his girlfriend Kelsey Kreppel in December 2021.

His fiance is also an internet sensation. The couple opened about their affair in 2017 by featuring on one of his podcast videos Insanely Chill.

The news of their engagement is revealed on Twitter by @bleedinglxv with the caption,

“cody ko and kelsey kreppel got engaged.. this brings me lots of joy Mending heart”

The fans are very happy after hearing the news and are showing the comment section with best wishes. 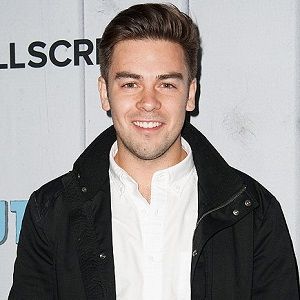 Who is Cody Ko?

Cody Ko is a famous YouTuber and Vine sensation. He came into the spotlight when he auditioned as Mary Poppins in what would be the first #6secondauditions video on the social video app Vine.

Moreover, his popular and most viewed youtube videos include Instagram “comedians” and “Cringing at my very first vines w/ Tana Mongeau”.

Cody began his career by posting his first video on Vine on April 3, 2013. So far, he gained massive success through his viral videos on Vine and Youtube.

Cody has been posting numerous comedy videos on various social sites. Initially, he got huge recognition when he came in the  #6secondauditions video on Vine as a Mary Poppins. On youtube, he has more than 463k subscribers. One of the popular videos Cody is Instagram “comedians” which has crossed 3.5 million views on Youtube.

In addition, he has also featured in Thoughts (2016), Camp Unplug(2016), and GOAT Rodeo (2017). Moreover, Cody has also appeared in the Talk-Show TV Series Zall Good. As of now, his videos on Youtube have crossed millions of views.

Cody is earning a decent amount of money from his hit videos on social sites. As of 2022, he has an estimated net worth of $6 million.

So far, Cody has not won any awards. However, in the near future, he will definitely grab some awards.

Currently, there are no desperate rumors regarding his personal and professional life. It seems he is doing his best without harming others. So far, he has never been in controversy yet.

Cody has a perfect height of 5 ft 9 inches and his weight is unknown. He has Brown eyes and Dark Brown hair.

Furthermore, he has also millions of views on Youtube.