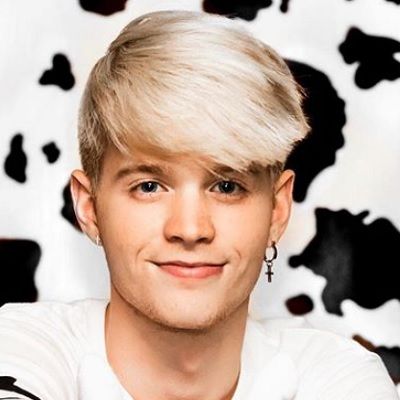 Cody Orlove is in a relationship with Zoe Laverne. Zoe is also a social media star.

But their relationship has not always been in a good place. They were in an on-and-off relationship for a while. He has posted many pictures with her on Instagram.

It is known that his girlfriend cheated on him. But at present, they are in a happy relationship.

On 13th February 2020, he posted a video of him and his girlfriend’s wedding. But it was a prank and they were getting married for 24 hours only.

Who is Cody Orlove?

Cody Orlove is an Instagram star and social media personality. Orlove is known as Mastercodster online. He is a TikTok star with more than 5.9 million followers.

He is known for the couple videos on TikTok. Likewise, he is a YouTuber as well.

Cody Orlove was born on 17th August 2001 in Chicago, Illinois. His family migrated to Georgia. He has not disclosed his parent’s name. Similarly, he has a sister Alexa Orlove and a brother Anthony Orlove.

He has not revealed his education either.

Cody is a TikTok star with the account name ‘zoes boyfriend’. He has around 5.9 million followers on TikTok. Similarly, he has 340.4 million likes. He makes videos with his girlfriend Zoe.

His videos get thousands and millions of likes.

Cody’s YouTube channel has around 908k followers. He makes prank videos and couple’s videos on his channel.

He uploaded his first video I Went To The Worst Reviewed Hotel in Chicago on 13th January 2019. Similarly, his video I Gave My Sister $10,000 To Stop Smoking got 2.8 million views.

He and his girlfriend Zoe has a couple channel ‘Cody & Zoe’ which has 1.15 million subscribers. They give an update about their relationship on this channel.

This Instagram star has 1.9 million followers. His posts are with his girlfriend mostly. As per his Instagram, he is an animal lover and uploads pictures with animals.

Cody released an EP My Reality in the year 2019. Similarly, he makes karaoke videos on YouTube and TikTok.

He earns a decent amount of money from his Instagram and TikTok. From his second channel ‘Cody & Zoe’, he makes earning of $880 – $14.1k.

Back in August 2019, there was news all over the Internet that the 18 years old YouTuber Cody Orlove was missing. His girlfriend Zoe LaVerne reported his missing.

But later he revealed that he took a break from everything. He was alright.

Cody has brown hair and blue eyes. He is 5 feet 9 inches tall and weighs around 59 kg.