Colbie Caillat at the current time is possibly single. She has not shared the details of her current affair or b0yfriends with the public.

But in the past, she was in a relationship for 1o years. She started to date Justin Young in 2009 and got engaged in May 2015. But later in April of 2020, the news of their broke up came. 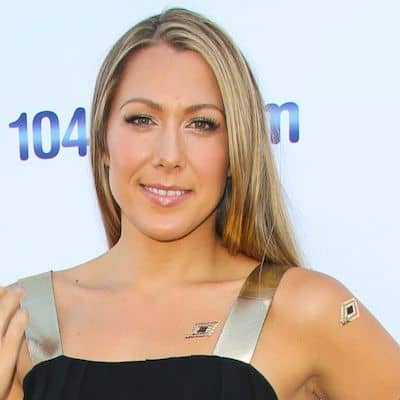 Who is Colbie Caillat?

She is an expert in Folk-pop, folk, pop, and R&B music genres and teamed up with other artists such as Jason Mraz, Jason Reeves, Ryan Tedder, and Taylor Swift.

Her birthdate is 28 May 1985 and she was born in Malibu, California, the United States as Colbie Marie Caillat. The name of her mother is Diane Leineke and her father’s identity is Ken Caillat (Record Producer).

Further, Colbie Caillat’s ancestry is a mix of French-English-German-Dutch, and has a sister named Morgan Anne Caillat.

As per her academics, she has completed her high school studies at Thousand Oaks High School.

Colbie Caillat first gained fame via social media Myspace. She then signed to the Universal Republic and released four albums. Her first album was Coco in 2017, then Breakthrough in 2009, All of You in 2011, and Christmas in the Sand in 2012.

Her two latest releases are Gypsy Heart (2014) and The Malibu Sessions (2016). Some of the tracks from these projects are “Mistletoe”, “Somethin’ Special”, “Brighter Than the Sun”, “Christmas in the Sand”, “Hold On”, and many more.

Other than this, this singer has many Eps titled Live in Berlin, Coco: Summer Sessions, Breakthrough: Acoustic Session, iTunes Session, etc.

By the reports of 2022, Colbie Caillat has an estimated net worth of $9 million which she collected from her work.

But her annual salary and other earnings are not yet made public. She did advertisements for American Cotton Producers and Importers, Apple, and Overstock.

As a social person, she supports various non-profit organizations. Some of them are Wish Upon A Hero, MusiCares, Earth’s Call Fund, the Humane Society of the United States, WE Charity, etc.

This Billboard Music Awards winner singer is keeping herself away from scandals along with desperate rumors.

Furthermore, she has naturally blonde hair and her eyes are green in color.

Colbie Caillat is officially available on several social sites. Her Facebook and Twitter accounts have more than 284k and 1.9M followers respectively.

Her YouTube channel is subscribed to by around 987k people. Also, she is active on Instagram with over 269k followers.