Cole Bennett is a business director who is famed for his organization, Lyrical Lemonade.

Currently, the music video executive, Cole Bennett is in a love affair with the well-named rapper, Tay Money. Tay is widely known for her song ‘Trapper’s Delight’, ‘Moneyway’, ‘Na Na’.

The couple began dating each other in the year 2019.

Nonetheless, he had some past affairs as well. Cole was in a love relationship with Lana Marie, a photographer, and Bennett often shared their photos on his Instagram.

Meanwhile, he was doubted for being close to his business partner and mate, Elliot Montanez, who surprised him with a trip to Coachella. She is diligently involved in running Lyrical Lemonade. 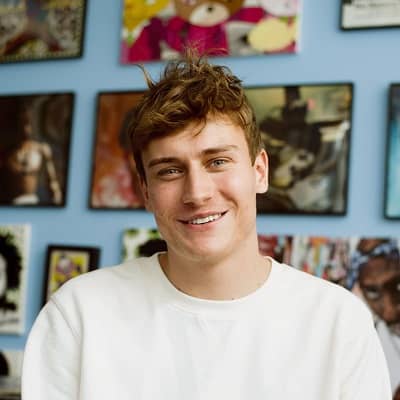 Who is Cole Bennett?

Cole Bennett was born on 14 May 1996. At present, his age is 24 years old. Likewise, his birthplace is Plano, Illinois, the USA.

Not much known about his family details, Cole has kept his father’s and mother’s details low-key. But, he has two sisters.

Talking about his nationality, he holds an American identity whereas his ethnicity is mixed. Also, he follows the Christianity religion.

Cole has earned his educational degree from Plano High school. Later, he quit college to concentrate on his career in videography and hip hop music.

The well-reputed personality had been interested in music at a very young age. Cole created Lyrical Lemonade as an internet blog at the time of studying in Plano, Illinois. He was motivated by his mother for his career and bought a camera to pursue his dream.

Very soon, he started directing a music video for local Chicago rappers, which consists of Vic Mensa and Taylor Bennett. Cole posted his work on his YouTube channel, Lyrical Lemonade. His channel ultimately annexed into other sub-genres of hip hop beyond the local Chicago scene like the emerging Soundcloud rap sub-genre.

In 2016 and 2017, Bennett earned high admiration collaborating with artists such as Famous Dex, Lil Pump, Smokepurpp, and Ski Mask the Slump God. Furthermore, he worked on the short movie ‘Lone Springs’ and which was released in April 2017.

Freshly, Cole gave a TED talk entitled ‘Mindset is Everything’ at the University of Illinois and also featured in different interviews of famous publications like ‘Rolling Stone’, ‘Forbes’, and ‘Billboard’.

The great executive became a well-known music video director after coordinating the music video for late Chicago rapper Juice Wrld’s “Lucid Dreams” as it reached number 2 on the Billboard Hot 100. Following his fame, Bennett has worked with some celebrities such as J. Cole, Wiz Khalifa, Kanye West, and Eminem.

Recently, he supervised the music video for Eminem’s hit single “Godzilla” which starred a guest performance from Juice Wrld, who died before his son’s release in March 2020.

The multi-talented personality is active in his profession from an early age. Cole has worked in different fields of music as a director, videographer, and producer as well.

It is estimated Cole Bennett has an estimated net worth of $3 million. Moreover, he makes $500,000 annually.

However, he has not revealed his assets details, exact income, and other details till now.

24 years old, music director, Cole Bennett has never been part of any sorts of rumors or controversies.

It seems that Bennett prefers enjoying his personal life and does not want to merge it with the public and media.

The dashing business personality has got a muscular athletic body structure. Cole has a tall height of 6 feet 1 inch. Also, he has a balanced body weight of 65kg.

Furthermore, Bennett’s eye color is light brown and his hair color is blonde.

About his social media presence, Cole Bennett is active on social media. The versatile personality has more than 2.8 million followers on his official Instagram account @_colebennett_.

Also, he is active on Twitter with more than 1 million followers.

Likewise, he has more than 17.1 million subscribers on his YouTube Channel.

It seems that he has huge popularity on social media.