Cole Sprouse is an actor who is the twin brother of Dylan. He is in a relationship.

But they have not confirmed if they are dating or not. Recently, the couple went on a vacation and he posted the holiday pictures on his Instagram account.

Prior, he has been in several relationships. From 2013 to 2015, he was in a relationship with actress, Bree Morgan. Also, the charming actor dated Victoria Justice.

Victoria is a popular model/singer and actress. They were together from 2004 to 2005. But it didn’t work out afterward.

The other women he has been together are Alyson Stoner and Katelyn Pippy. He was with Alyson in 2004. Similarly, he dated Katelyn Pippy in 2005. 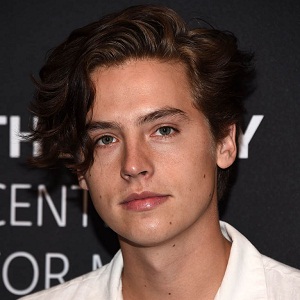 I had a really, really hard time working with Aniston because I was so in love with her. I was infatuated. I was speechless - I'd get all bubbly and forget my lines and completely blank. It was so difficult.

Whenever someone says, or whenever someone harkens back to, a golden age of the U.S. - usually the '40s or '50s - 90 percent of the time, they're a straight white man.

Who is Cole Sprouse?

Cole Sprouse is an American actor seen in TV series along with his twin brother, Dylan. He is a popular TV and film actor. He is known for acting since early childhood in several films and TV series.

As of now, he is famously recognized for starring in an American TV sitcom named, “The Suite Life of Zack and Cody”. Additionally, he is also a prominent figure among the public for playing Jughead Jones in the teenage drama series, “Riverdale”.

Both of his parents were working as English teachers in Italy. His father’s name is Matthew Sprouse. And his mother’s name is Melanie Wright. He has a twin brother, Dylan Sprouse.

His parents named him after the jazz singer and pianist Nat King Cole. Although he was born in Italy, he grew up in California. It was after they moved to the U.S at the age of 4 months.

As per his education, he joined the Gallatin School of Individualized Study. He studied archaeology and humanities there. Later he completed his education there.

Cole, along with his twin brother, Dylan is active in this field even before the age of 1. When they were 8 months old, they featured in commercials for diapers.

In 1993, he and his brother played the character of Patrick Kelly in the TV series, “Grace Under Fire”. They portrayed this role till 1998.

The same year in 1998, they also featured on “Mad TV”. Afterward, in 1999, he and his brother debuted in the feature film. Their first film was “Big Daddy”. Then in 1999, the twin brothers appeared as the twin in the film, “The Astronomer’s Wife”.

Additionally, he appeared in several movies and TV series. Discussing his major work in TV, the twin brothers got famous after acting in the sitcom, “The Suite Life of Zack and Cody”. Similarly, as of now, he is well-known for portraying Jughead Jones in the teenage drama, “Riverdale”.

Currently, he demands a huge amount of salary. Consequently, the twin brothers have collected an estimated net worth of $18 million as of 2022.

Cole has been part of several rumors. Back in 2016, the rumors suggested him dating Riverdale’s co-actress, Lili Reinhart.

Cole has a very handsome and charming personality. And it comes with an incredible body.

He stands tall at a height of 6 feet and weighs 82 kg. He has blonde hair color and green eye color.

His body measurements are chest size of 42 inches, biceps size of 14.5, and his waist size of 32 inches. His dress size and shoe size are unknown.