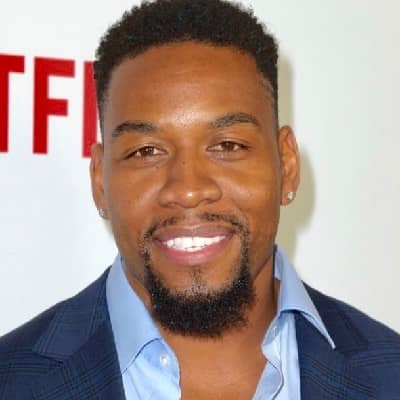 Coley Speaks’ current relationship status is married. He is married to an American actress, Michelle Mitchenor.

They said to celebrate their marriage at The London West Hollywood Hotel at first. Later, the couple tied the knot on October 14, 2018, in the Courtyard wedding ceremony.

The ceremony was held in front of their beloved friend and family members. Their engagement rings were inspired by the theme of cosmic love. The rings were designed by Canadian designer, Emily Elizabeth.

Who is Coley Speaks?

Coley Speaks is an American actor, writer, and producer. He is best known for playing the role of Messiah in Netflix’s hit series, Seven Seconds and as Kevin Gaines in USA’s hit series, Unsolved: The Murders of Tupac and the Notorious B.I.G.

Speaks owns Speaks Enterprises Inc and is also the co-owner of 10 Down studios.

He hasn’t revealed any information regarding his family and siblings. Coley belongs to American nationality and is of Afro-American ethnicity.

Talking about his education, he has attended Hampton University earning a B.S. in Marine & Environmental Science.

After his graduation, Coley Speaks relocated to Los Angeles per building his career. In his early years, Mustafa worked as a fitness model and personal trainer. He eventually developed into a fitness business owner. And likely, he opened SS3D Fit Club, an exclusive gym serving celebrity entertainers.

After some time he published his first book, “The Mind Muscle Method“. Through the book, he has the vision to empower individuals to push beyond their mental limitations to achieve success. Then Coley appeared in various movies and built his career successfully.

His career as an actor flourishes in 2014 when he appears in two movies Free Fall and Rapunzel Jackson. A year later he appeared as an African American man in the American science fiction psychological horror-thriller film, Circle. Coley’s breakout role was on Page 36 (HBO).

Likewise, in 2018, he played as Messiah in Netflix’s hit series, Seven Seconds. In the same year, he also starred as Kevin Gaines in the USA’s hit series, Unsolved: The Murders of Tupac and the Notorious B.I.G. Furthermore, Speaks has worked with numerous multi-award-winning writers, directors, and producers.

Similarly, Coley is the owner of Speaks Enterprises Inc. Its home is in Alchemist Prime Productions. Moreover, he is also the CBO of The Mitchenor Foundation and is also the co-owner of 10 Down studios.

Coley’s exact net worth is unknown. Yet looking at his lavish lifestyle we can assure that his total fortune is probably in millions.

He has his own production house and also owns a gym. Moreover his wife, Michelle Mitchenor has a net worth of around $1 million.

Coley has also managed himself not to be appearing in any sort of rumors and controversy until now.

Coley Speaks has an athletic-built body standing with a height of 6 ft and weighs 100 kg. Talking about her appearance, he has black colored short colored hair with dark brown eyes.

You may also read the bio of Antoine Dodson, Johnny Hazzard, Geoffrey Arend, and Sean Maguire.